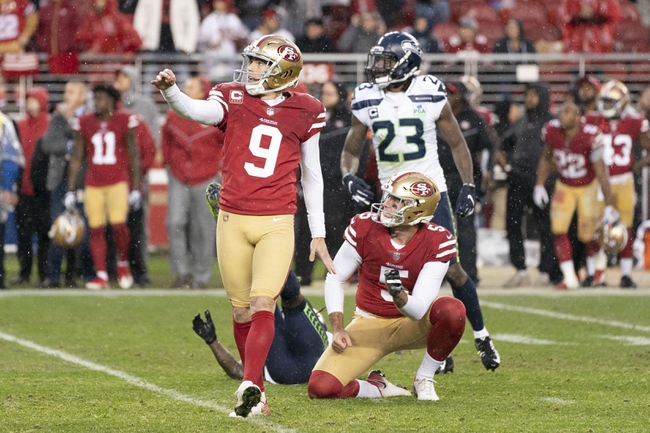 The Seattle Seahawks travel to take on the  San Francisco 49ers.  This will be a battle of the NFC West that pairs two good teams together.  The Seahawks are (7-2) on the season and will be hoping to give the 49ers their first loss of the season (8-0).  The Seahawks are coming off an OT win at home against the Tampa Bay Buccaneers, 40-34.  The 49ers will have a little extra rest, as the 49ers own Thursday night 28-25 over the Arizona Cardinals.

In the win over the Buccaneers, Russell Wilson was tremendous.  Wilson completed 29 of 43 passes for 378 yds, while throwing for 5 TD's.  Running back Chris Carson rushed for over 100 yds in the game.  The Seahawks trailed 14-7 after the first quarter.  Tyler Lockett did everything he could to give Seattle a win, Lockett reeled in 13 receptions for 152 yds and 2 touchdowns.  Seattle out gained Tampa Bay on the day 492 to 418.  Seattle kicker Jason Myers did miss two field goals in the win.

49ers quarterback Jimmy Garoppolo was 28 of 37 for 317 yds.  Garoppolo also threw 4 touchdown passes.  Emmanuel Sanders had 7 receptions out of 9 targets for 112 yds and a touchdown.  The 49ers led 28-14 going into the 4th quarter, then the Cardinals attempted to make a comeback.  The Cardinals put up 11 4th quarter points on the 49ers, but it wouldn't be enough as the 49ers held on to win by 3 points.

These are two of the best teams in the league and both being from the same division will only make the game that much better.  The Seahawks have controlled this series and it hasn't even been close.  The Seahawks have won 9 of the last 10 meeting's against the 49ers.  Pete Carroll always seems to have a great game plan against the 49ers.  This will be a game that goes down to the wire.  49ers will stay unbeaten but the Seahawks cover. Final score prediction, 49ers win and the Seahawks cover, 27-24.