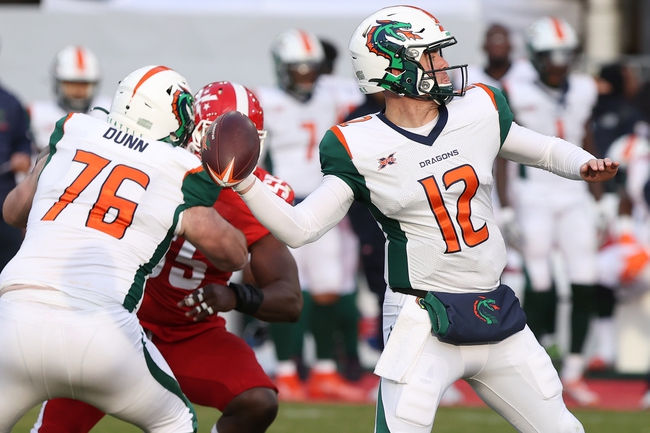 The Dallas Renegades look to get a game above a .500 record after beating the Los Angeles Wildcats last weekend. The Dallas Renegades looked like a completely different team with quarterback Landry Jones under center, and they seem to have something in the running back duo of Cameron Artis-Payne and Lance Dunbar. In his season debut, Jones completed 70 percent of his passes for 305 yards, one touchdown and two interceptions. The Dallas Renegades are coming off a 19-point fourth quarter, which is 10 points more than they scored in their entire week one loss to the St. Louis BattleHawks. It’ll be interesting to see which Dallas team we get in week 3. Defensively, Frank Alexander and Tegray Scales have combined for two sacks for the Renegades.

The Seattle Dragons also look to build on a 1-1 record after beating Tampa Bay in their home opener. The Seattle Dragons looked much improved defensively at home and seem to have an identity on that side of the ball, as Steven Johnson leads the XFL with 18 tackles and Nick Temple has 14 tackles to his name as well. Kyle Queiro and Marcell Frazier have each come away with an interception. The Dragons are going to be in games due to their ability to come away with game changing plays on the defensive side, but quarterback Brandon Silvers has to be sharper through the air and limit his mistakes. Through two games, Silvers is completing just 48.3 percent of his passes for 308 yards, four touchdowns and three interceptions. It’s early, but the Dragons need to find some balance.

The Dallas Renegades continue to be overhyped because Bob Stoops is their head coach and they have a former NFL quarterback in Jones, so oddsmakers are high on them and have been from the start. However, the Seattle Dragons looked decent last week and will be in a lot of games if the defense continues to force turnovers and keep teams out of the end zone. The Dragons have allowed six or less points in each of their last five quarters, so while it may not be pretty football, they're grinding and finding ways to hang around. Bottom line is we're still figuring these teams out. Home dog? I'll take my chances..