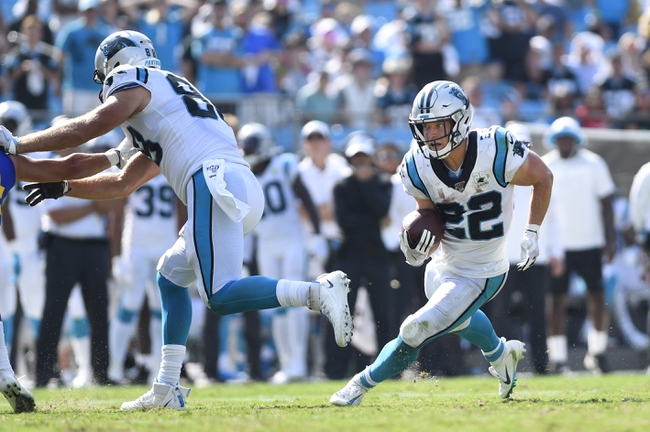 The Tampa Bay Buccaneers and the Carolina Panthers meet in a week 2 NFC South division matchup in NFL action from Bank of America Stadium on Thursday night football.

The Tampa Bay Buccaneers will look to bounce back after a 31-17 loss to San Francisco in their last outing to start the year on a losing note. Jameis Winston threw for 194 yards, a touchdown and 3 interceptions on 20 of 36 passing while Ronald Jones II had 75 rushing yards and Peyton Barber had 33 rushing yards. Chris Godwin had a team-high 53 receiving yards and a touchdown while Dare Ogunbowale and O.J. Howard each had a team-high 4 receptions. Defensively, Vernon Hargreaves III had a pick-six and Carlton Davis III had a fumble recovery while Shaquil Barrett had a sack and Jordan Whitehead led the Bucs with 7 solo tackles.

The Carolina Panthers will also be looking to rebound after a disappointing start to the year, narrowly falling to the Los Angeles Rams by a final score of 30-27 last time out. Cam Newton threw for 239 yards and an interception on 25 of 38 passing while Christian Mccaffrey ran for a team-high 128 yards and 2 rushing scores and Alex Armah added a rushing score of his own. McCaffrey also led the Panthers in receiving with 81 yards and 10 receptions while DJ Moore had 7 grabs for 76 yards. Defensively, James Bradberry had a sack and an interception while Tre Boston and Shaq Thompson each had 7 solo tackles and a pair of assisted tackles.

These two teams have a history of playing each other reasonably close with four of the last six meetings over the last three years being decided by seven points or less. However, side by side, I was disappointed by what Tampa Bay put forth while Carolina went toe to toe and hung around with the defending NFC champions in the Los Angeles Rams. The Carolina Panthers also have the two biggest X-factors on the field in Cam Newton and Christian McCaffrey both of whom can be game-changers. I think the Panthers are the better team and should be able to win this one by at least a touchdown, so I’ll lay the points with Carolina here.