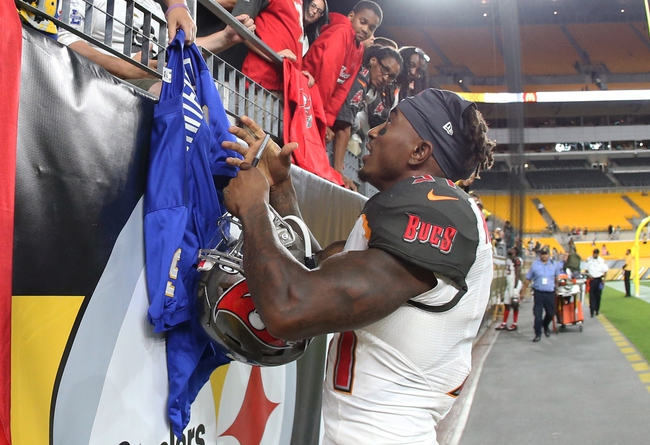 The Miami Dolphins and the Tampa Bay Buccaneers meet in a battle of Florida in week 2 NFL preseason action from Raymond James Stadium.

The Miami Dolphins will look to remain unbeaten in preseason play after starting with a 34-27 win over Atlanta in week 1. Josh Rosen saw the bulk of the snaps under center, going 13 for 20 for 191 yards with an interception while Jake Rudock went 6 of 8 with 65 yards and a touchdown. Patrick Laird led the Dolphins with 24 rushing yards on 6 carries while Kalen Ballage, Myles Gaskin and Mark Walton each had a rushing touchdown. Preston Williams had 4 catches for 97 yards while Brice Butler and the aforementioned Gaskin each had 3 receptions with Gaskin logging the Dolphins’ lone receiving TD of the day. Defensively, Dewayne Hendrix had two sacks and Nate Orchard added a sack of his own while Jerome Baker led Miami with four tackles.

The Tampa Bay Buccaneers will be looking for their first W of the preseason after kicking things off with a 30-28 loss to Pittsburgh in week 1. Ryan Griffin threw for 330 yards and a touchdown on 26 of 43 passing while expected starter Jameis Winston threw for 40 yards and a TD on 5 of 6 passing. Dare Ogunbowale led the Bucs on the ground, turning his 10 carries into 34 yards and a pair of rushing scores while Spencer Schnell and Tanner Hudson each had a team-high 7 receptions with Schnell logging a team-leading 119 receiving yards while Hudson had 84 yards and a touchdown. Chris Godwin hauled in Tampa Bay’s other receiving touchdown while Justin Watson recorded 4 receptions for 37 yards. Defensively, Deone Bucannon and Carl Nassib each had a sack while Corey Nelson led the Buccaneers with 4 tackles in the defeat.

The Dolphins got off to a strong start in the preseason, but that win came at home and the Dolphins have a history dating back to last season of mightily struggling away from home. Tampa Bay had a hard loss last time out, but the Buccaneers have had more luck ATS dating back to last year and have owned Miami ATS for quite some time now. All in all, side by side Tampa Bay is the better team and it doesn’t hurt that they’re at home here either. I’ll lay the points with the Buccaneers in this spot.