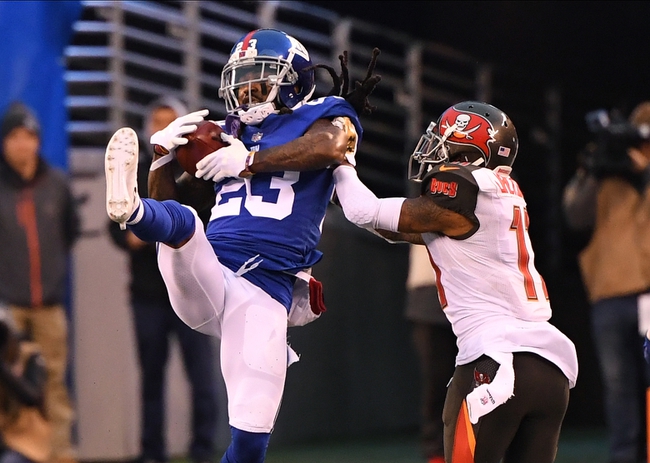 The New York Giants need a victory here to rebound from a rough 0-2 start to the season. The New York Giants have lost seven of their last 10 road games. Eli Manning is completing 62.9 percent of his passes for 556 yards, two touchdowns and two interceptions. Manning has one or less touchdown passes in six of his last eight games. Evan Engram and Cody Latimer have combined for 268 receiving yards and one touchdown while Bennie Fowler has 10 receptions. The New York Giants ground game is averaging 140 yards per contest, and Saquon Barkley leads the way with 227 yards and one touchdown. Defensively, New York is allowing 31.5 points and 441 yards per game. Antoine Bethea leads the New York Giants with 17 tackles, Olsen Pierre has one sack and Alec Ogletree has two pass deflections.

The New York Giants have covered 10 of their last 14 games as a road underdog. The Tampa Bay Buccaneers have failed to cover six of their last eight games as a home favorite. The Giants have shown very little promise offensively through two games and enter this week extremely banged up at wide receiver, as Cody Latimer, Sterling Shepard, Garrett Dickerson and Darius Slayton are all questionable with injuries. The Tampa Bay Buccaneers have promise, but it's really a question of which Winston shows up. When the Bucs QB takes care of the ball, Tampa Bay has the potential to be a sneaky good team that could make some noise in the NFC. This is a lot of chalk to lay between two average or below average teams, but I have no trust in the Giants right now. It's the home team or pass.