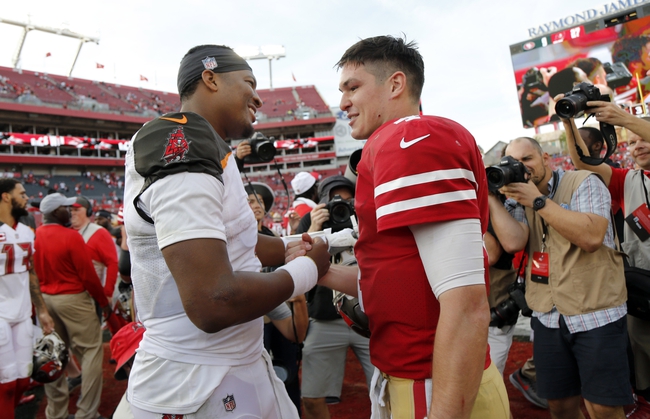 The San Francisco 49ers have won a combined 12 games the last three years and haven’t made the playoffs since 2013. The San Francisco 49ers have lost each of their last eight road games. The San Francisco 49ers have won six of their last eight regular season openers. The 49ers should feel better about their chances this season with the return of Jimmy Garoppolo at quarterback, as many expected him to be the face of the franchise, but injuries have prevented him from making a mark. Garoppolo, along with a solid offensive line, and Kyle Shanahan calling the shots, this 49ers offense has a much better chance to succeed. The 49ers weren’t great defensively last year, but they have a talented defensive front with DeForest Buckner, Nick Bosa, Arik Armstead and Ronald Blair III taking turns getting after the quarterback. Assuming health holds up, this could be the year the 49ers finally show the league what they’ve been working towards.

The Tampa Bay Buccaneers haven’t made the playoffs since 2007 and will begin the Bruce Arians era. The Tampa Bay Buccaneers have split their last eight home games. The Tampa Bay Buccaneers have won each of their last three regular season openers. The Bucs have some playmakers on the offensive side of the ball in OJ Howard and Mike Evans, but it truly comes down to if Jameis Winston is capable of developing into a consistent quarterback. Winston is one of those players who shows flashes of brilliance and has you thinking he could be special, and then there’s other plays that leave you scratching your head. Give Tampa Bay fans some consistency. The Buccaneers have nowhere to go but up defensively and the addition of Ndamukong Suh was certainly a big start. Noah Spence is a player who should finally start tapping into his potential and the return of Vernon Hargreaves, who missed almost all of last year with a shoulder injury, is a massive boost to this Tampa secondary.

You can make a case the San Francisco 49ers are the better team here, but it's always tricky with west coast teams playing on the east coast. We also saw how poorly the 49ers played on the road last season. Raymond James Stadium can be a tough place to play and the weather is certainly going to play a factor with a hurricane expected to come across the state. The Tampa Bay Buccaneers have a sneaky decent roster and can put together impressive moments when Winston isn't making boneheaded decisions with the football. In a near pick em game, I'm kind of leaning toward the Bucs at home.