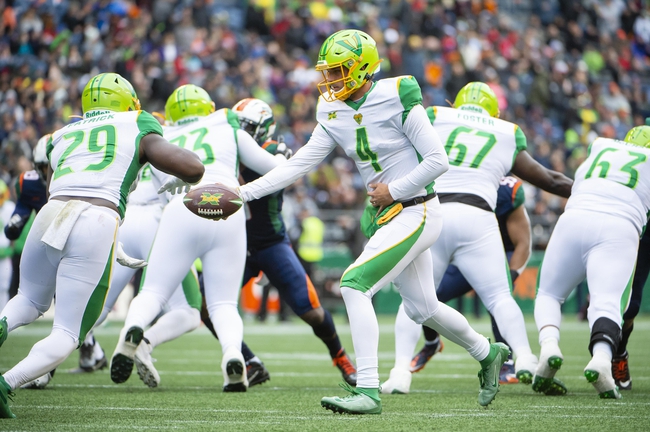 The Houston Roughnecks look to build on their 2-0 record when they take to the road for the first time. The Houston Roughnecks have produced a combined 65 points through their first two games and a lot of it has to do with P.J. Walker, who is completing 61.4 percent of his passes for 449 yards and seven touchdowns. The former Temple quarterback Walker is probably your early frontrunner MVP in the XFL this season. Receiver Cam Phillips has 12 receptions for 130 yards and four touchdowns. Defensively, the Roughnecks are led by linebacker Beniquez Brown and his 15 tackles as well as linebacker LaTroy Lewis and his two sacks. The Houston Roughnecks quietly have the second best odds to win the championship two weeks through the season.

The Tampa Bay Vipers are looking for their first victory when they make their home debut after losing road trips to New York and Seattle. The Tampa Bay Vipers have scored just 12 points through two games and can’t find any success between quarterbacks Aaron Murray and Taylor Cornelius. The Tampa Bay Vipers have combined for zero touchdown passes and four interceptions through their first two games. About the only good news for Tampa is it has one of the better running back tandems with De'Veon Smith and Jacques Patrick combined for 230 rushing yards, but it’s hard to build on that success when they’re always trailing. Defensively, safety Marcelis Branch is second in the XFL with 17 tackles to his name.

The Houston Roughnecks are absolutely rolling right now and have an explosive offense, but now comes the true test with them on the road. The Tampa Bay Vipers looked improved last week despite the loss, and while they haven't had a whole lot going right for them up to this point, they were still a popular pick to win the title before any games started. The Tampa Bay Vipers have talent and speed on both sides of the ball, it's just a matter of putting it together and actually scoring points. It's still early, so nobody should have concrete views of either team. I'll take my free touchdown and the home team.