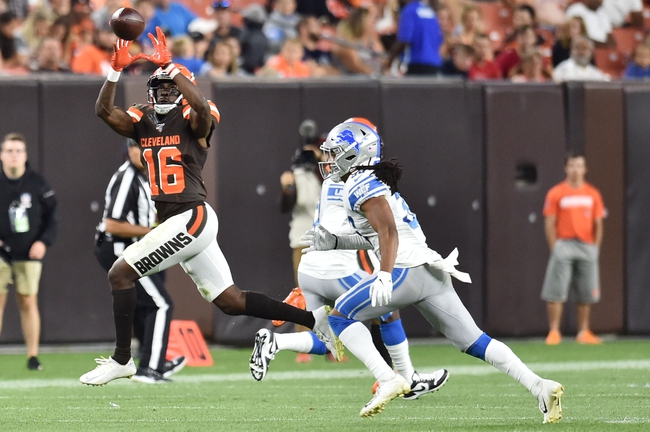 The Tennessee Titans and the Cleveland Browns meet in week 1 NFL action from FirstEnergy Stadium on Sunday afternoon.

The Tennessee Titans will look to start the season on a high note after finishing the preseason with a 2-2 record after a 19-15 win over Chicago in their final preseason game. Logan Woodside threw for 212 yards and a pair of touchdowns on 17 of 29 passing while Dalyn Dawkins had 117 rushing yards on 13 carries as well as accounting for both receiving TDs for the Titans with 4 grabs for 31 receiving yards. Anthony Ratliff-Williams recorded a team-high 54 receiving yards while Cody Hollister had 4 grabs for 50 yards and Kalif Raymond had 45 receiving yards with his lone reception. Defensively, Derick Roberson had a pair of sacks and Tye Smith had a sack of his own while Kareem Orr led the Titans’ defense with 12 tackles in the winning effort.

The Cleveland Browns will also look to start the regular season the same way they finished the preseason, logging a 20-16 win over Detroit in their last preseason game. Garrett Gilbert threw for 117 yards and a touchdown on 13 of 24 passing while David Blough recorded 115 yards and a pair of picks on 11 of 17 passing. Dontrell Hilliard had 65 rushing yards and Trayone Gray had 17 rushing yards and a touchdown while Ishmael Hyman led the Browns’ receivers with 5 catches for 61 yards. Derrick Willie had 46 receiving yards while the aforementioned Hilliard added Cleveland’s lone touchdown reception in the win. Defensively, the Browns combined for 7 sacks while Phillip Gaines and Mack Wilson shared the team-high with 4 tackles in the victory.

The points with Tennessee are tempting mainly because it’s week one and we know what we’re getting from Tennessee with Mariota leading the charge. However, Tennessee hasn’t had much luck covering in this matchup in recent years, and there’s a real sense of optimism in Cleveland. Sure, the Browns faithful have said that over the have said that in recent years and were rewarded with 4 wins in three seasons from 2015-2017. But I think 2018 was a real leap for the Browns, and the addition of Odell Beckham Jr. and Kareem Hunt among others will only add to that optimism. I think there’s going to be a real energy at FirstEnergy Stadium in week 1, and while many could think that would lead to a letdown for Cleveland, I think the opposite and I think that the Browns win this one by at least a touchdown, so I’ll lay the points with Cleveland in this one.