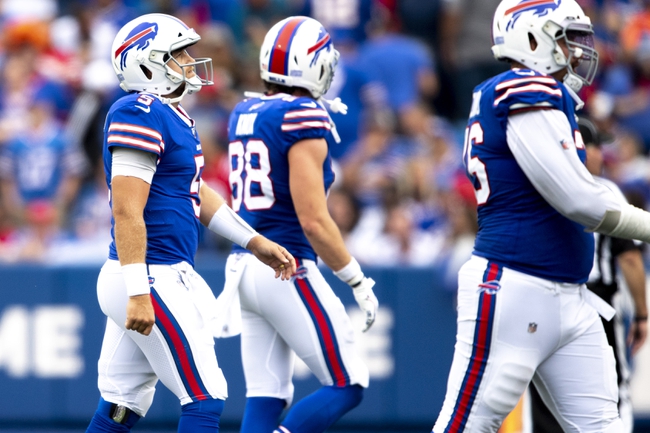 Nissan Stadium will play host to a Sunday afternoon NFL matchup between the Buffalo Bills and Tennessee Titans. Buffalo won three straight games to start the season, but were unable to make a major statement during last week’s 16-10 home loss versus New England. Matt Barkley’s pass was intercepted in the end zone with 1;27 remaining to seal the fate of the Bills.

Buffalo QB Josh Allen threw three interceptions before being knocked out of the game by a helmet-to-helmet hit. RB Frank Gore rushed for 109 yards in a losing effort for the Bills, who nearly erased an early 13-point deficit.

The Tennessee Titans have split their first four games and are locked in a four-way tie for the AFC South Division title. On Sunday, Tennessee scored all of their points during the first half of a 24-10 road triumph against Atlanta. Marcus Mariota threw for three touchdowns and Derrick Henry rushed for 100 yards on 27 carries for the Titans.

Tennessee’s defense came up with three stops on fourth down and sacked Matt Ryan five times. The Titans were outgained by a 422-365 margin on the afternoon.

Buffalo QB Josh Allen remains in concussion protocol and is listed as questionable for this game. These two teams are very similar in that they both are successful running the football and lean on talented defenses. Look for the under to cash on Sunday. Final Score Prediction, Tennessee Titans 17-13.