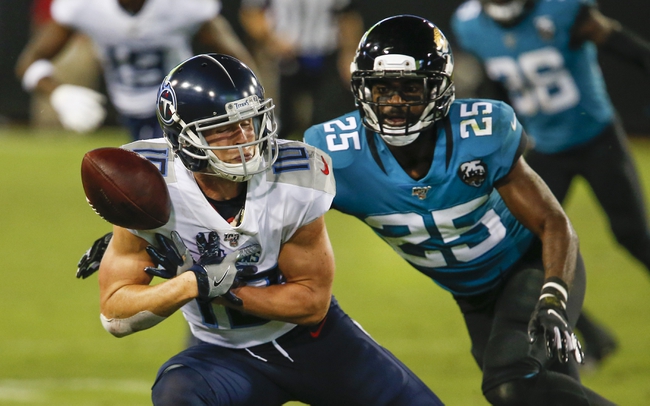 The Jacksonville Jaguars are on the road for a contest with the Tennessee Titans.  The Jaguars are (4-6) thus far, coming off a 33-13 loss to the Colts.  The Titans are (5-5) on the year, after beating the Chiefs, 35-32.  The Titans were on a bye this past week.

In the Jaguars loss to the Colts, Jacksonville was led on offense by Nick Foles.  Foles completed 33 of 47 passes for 296 yds, while throwing 2 touchdowns and 1 pick.  The jaguars jumped on top with the first points of the game and led 7-0.  The Colts would then score the next 31 points.  The Jaguars were out gained 389 to 308in the game.  Jacksonville was held to just 29 yds rushing.  Jacksonville had 8 penalties in the game.

In the win over the Chiefs, the Titans were guided by running back Derrick Henry.  Henry rushed for 188 yds on 23 carries and 2 added 2 scores.  Quarterback Ryan Tannehill was 13 of 19 passing for 181 yds and 2 touchdowns.  Anthony Firkser and Adam Humphries added receiving touchdowns in the game.  The Titans got smoked in total yds, 530 to 371.  However, the Titans defense did their job when needed.  The Titans forced 4 field goals and also had a defensive touchdown.

The Jaguars who have had a great defense in the last couple years, have gone south in the rush defense lately.  Jacksonville ranks 29th in rushing yds allowed (134.6) per game.  This bodes well with the way Derrick Henry played last game against the Chiefs.  Coming off a bye week, will only help the Titans in this home matchup as well.  Jacksonville has not looked great offensively this year, averaging just 19 points per game.  The titans haven't been much better, averaging just 20 per game on offense.  The Titans however, have been upping that point total in their recent games.  Titans offense has look good in 3 of the last 4 games and the Jaguars defense has looked less than stellar.  I'll side with Tennessee at home, as a win put s the Titans above .500.  Final score prediction, Titans cover, 26-17.