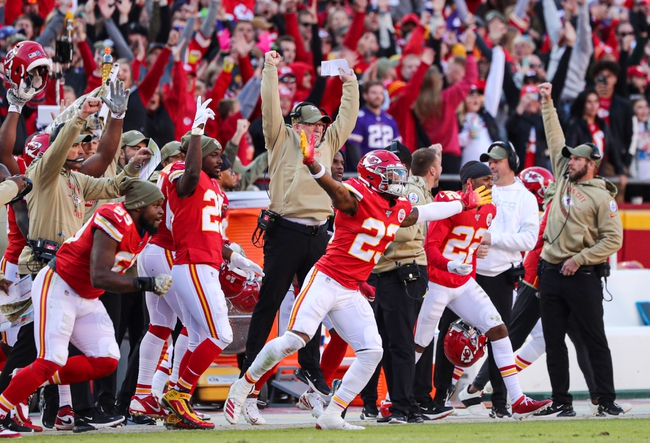 Kansas City may or may not have Patrick Mahomes back in action on Sunday when the Chiefs (6-3) head to Nissan Stadium in Nashville to face the Tennessee Titans (4-5). Mahomes is currently listed as questionable to open the week heading into week 10 action. If Mahomes is to play, that will change the conversation of this game completely. In short, if Mahomes plays and is healthy, take the Chiefs if you can still get them at minus-3.

Assuming Mahomes won’t play, this will be week three of Matt Moore, who has filled in admirably for the Chiefs’ starter. Moore has led his team to a one-touchdown loss to Green Bay before knocking off Minnesota last week, 26-23. Moore completed 25-of-35 passes for 275 yards and a touchdown without throwing an interception. That passing, combined with Damien Williams’ opportunistic rushing going 125 yards on just 12 carries and a score, helped a short-handed Chiefs team knock off what was one of the hottest teams in the NFL. Three Hill added six catches, 140 yards, and a touchdown for the Chiefs.

This would be Moore’s first start on the road this season for the Chiefs, although he did play on the road when he took over for Mahomes in Denver. Moore was good then as well, completing 10-of-19 passes for 117 yards and a touchdown. But that was Denver and Moore took the game over already with a lead that was extended on defense when Reggie Ragland picked up a fumble on the 5-yard line and returned it for a touchdown to extend the lead to 20-6.

This one will be Moore’s game from the start and it will be a bit more of a test than Denver was. Tennessee’s defense is stingy and allows just 18.3 points per game — good enough for 7th best in the NFL. That defense, which is fifth in the NFL with nine interceptions, combined with the home crowd and the loud atmosphere should give Moore something that he hasn’t seen for some time.

Kansas City’s defense has just given up too many points to be called elite at this point of the season. Despite its 6-3 record, Kansas City has allowed 28 or more points five times and ranks 22nd in the NFL in yards allowed at 369.3 per game and 18th in points allowed at 22.4 points per game. That total is cushioned with poor offensive outputs from teams like Oakland (10 points) and Denver (6 points). Without those two games, Kansas City is allowing a whopping 27.5 points per game.

Tennessee’s offense will look to take advantage. Derrick Henry has been strong all year running for 644 yards and six touchdowns for an average 71.6 yards per game. But struggles at the quarterback position have caused issues for the Titans’ offense all year long. Tennessee ranks in the bottom third of the NFL in passing at 212.9 yards per game as Marcus Mariota was benched and Ryan Tannehill took over. Tannehill has gone 2-1 as a starter with wins over the Chargers and Tampa Bay before a 30-20 loss to Carolina last week.

So will this resurgence in offense be enough against Kansas City’s poor defense without Mahomes? Possibly. But the numbers say otherwise. The Chiefs have experience this year as a road favorite and have gone 3-1 against the spread in those games. Stick with the trends and go with Kansas City to cover the three points.