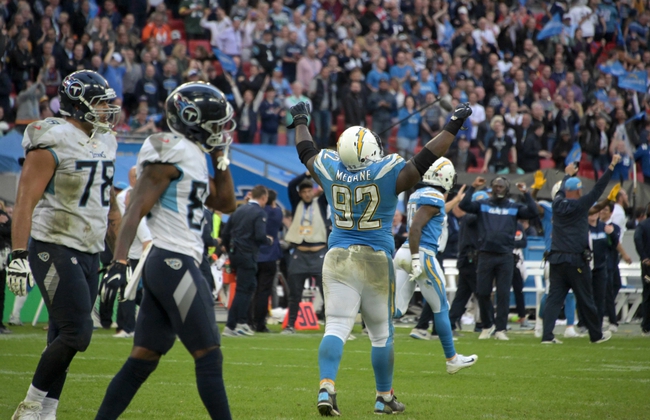 On Sunday, the Los Angeles Chargers visit Nissan Stadium in Nashville, Tennessee to play the Tennessee Titans in an AFC clash. The Chargers lost their second straight after falling to the Pittsburgh Steelers 24-17 Sunday night. Los Angeles trailed 21-0 at the half and 24-0 entering the fourth quarter and rallied with 17 points including a pair of Philip Rivers TD passes in the fourth quarter that just came up short.

Tennessee lost its second straight after falling to the Denver Broncos on the road 16-0 on Sunday. The Titans gained just 204 yards against a tough Broncos defense and Marcus Mariota suffered three sacks and during the third quarter was benched after throwing an interception. Mariota threw for just 63 yards and one interception for a rating of just 9.5. Ryan Tannehill was sacked four times after taking over for Mariota.

Marcus Mariota has thrown for 1,179 yards, seven touchdowns and two interceptions. The leading rusher is Derrick Henry with 416 yards and four touchdowns. A. J. Brown leads all Titans’ receivers with 273 yards and two touchdowns and Corey Davis has 237 yards receiving and one touchdown. Rashawn Evans leads the Titans in tackles with 45.

The UNDER has cashed in each of the Chargers last 5

The UNDER has cashed in 5 of the Titans last 6

Both teams are amidst two-game losing streaks. The Chargers cannot get untracked on offense earlier enough to stay in games and then must rally late with each of the last two games falling short. The Titans defense has kept Tennessee close, but the offense cannot find a way to keep drives going. Take the UNDER in a low scoring boring AFC battle. Final Score Prediction, Tennessee Titans win, but our best play is UNDER 21-17