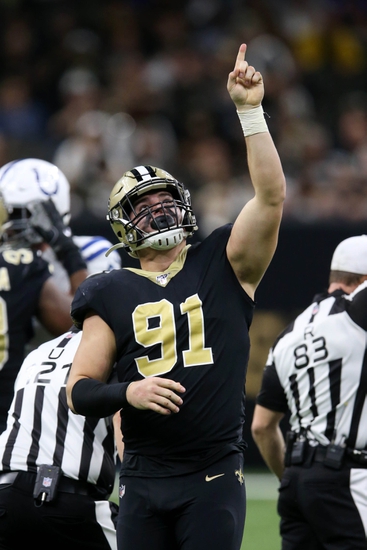 The New Orleans Saints head to Tennessee on Sunday for a game against the Titans in a matchup of teams from the NFC and AFC.  In their last game, the Saints defeated the Indianapolis Colts by the score of 34-7.  Saints quarterback Drew Brees completed 29 of 30 passes for 307 yards and 4 touchdowns.  Alvin Kamara was the Saints leading rusher as he carried the ball 14 times for 66 yards.  Michael Thomas was the most productive New Orleans receiver on the night as he caught 12 passes for 128 yards and a touchdown.  The Saints gained a total of 424 yards against the Colts while allowing 205 total yards.

With the win against Indianapolis, the Saints moved to 11-3 on the season and have a firm grip on 1st place in the NFC South.  Saints quarterback Drew Brees has thrown for 2,447 yards and 21 touchdowns against 4 interceptions so far this season.  Running back Alvin Kamara has been the leading rusher for New Orleans as he has carried the ball 152 times for 678 yards and 1 touchdown.  Michael Thomas is the lead receiver for the Saints as he has caught 133 passes for 1,552 yards and 8 touchdowns for far this year.  The Saints enter Sunday’s game with 5 players listed on their injury report as Andrus Peat is listed as out while Kiko Alonso, Vonn Bell, Patrick Robinson are listed as questionable and Saquan Hampton is on injured reserve.

The Tennessee Titans welcome the New Orleans Saints into town after losing their last game to their divisional rivals, the Houston Texans by the score of 24-21.  Titans quarterback Ryan Tannehill completed 22 of 36 passes for 279 yards and 2 touchdowns against 1 interception.  Titans running back Derrick Henry led the way on the ground for his team, rushing 21 times for 86 yards.  Wide receiver A.J. Brown was the leading receiver on the day for Tennessee as he caught 8 passes for 114 yards and 1 touchdown in the game against the Texans.  The Titans offense gained a total of 432 yards in the game while their defense allowed 374 yards.

With the loss against Houston, Tennessee is now 8-6 on the year and in 2nd place in the AFC South.  Quarterback Ryan Tannehill has been nothing short of brilliant since taking over under center for the Titans and has now thrown for 2,272 yards and 17 touchdowns against 6 interceptions.  Running back Derrick Henry has been productive all season on the ground as he has rushed 271 times for 1,329 yards and 13 touchdowns this season.  A.J. Brown has been the leading receiver for Tennessee as he has caught 47 passes for 893 yards and 7 touchdowns this year.  The Titans enter Sunday’s game with 3 players on their injury report as Adoree’ Jackson, Daren Bates and Adam Humphries are all listed as out.