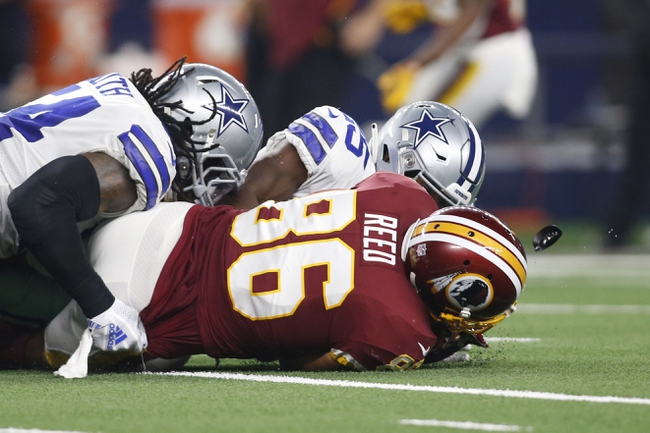 The Dallas Cowboys look for a quick 2-0 start after beating up on the New York Giants. The Dallas Cowboys have split their last six road games. Dak Prescott is completing 78.1 percent of his passes for 405 yards, four touchdowns and zero interceptions. Prescott has a combined five touchdown passes in his last three games. Michael Gallup and Amari Cooper have combined for 264 receiving yards and one touchdown while Randall Cobb has four receptions. The Dallas Cowboys ground game is averaging 89 yards per contest, and Ezekiel Elliott leads the way with 53 yards and one touchdown. Defensively, Dallas is allowing 17 points and 470 yards per game. Xavier Woods leads the Dallas Cowboys with 11 tackles, Leighton Vander Esch has two sacks and Jeff Heath has two pass deflections.

The Dallas Cowboys are 5-1-1 ATS in their last seven games as a favorite of at least three points. The Washington Redskins have split their last 10 games ATS when an underdog of at least three points. The Cowboys have won seven of the last nine meetings against the Redskins, and four of those wins were decided by eight or more points. The Washington Redskins played just about as well as they're going to play this season last week, and coming up short as double-digit underdogs could take a bit of steam out of their sails. There's a pretty big gap between these two teams in terms of talent. It's a game the Cowboys should win by at least a full touchdown.