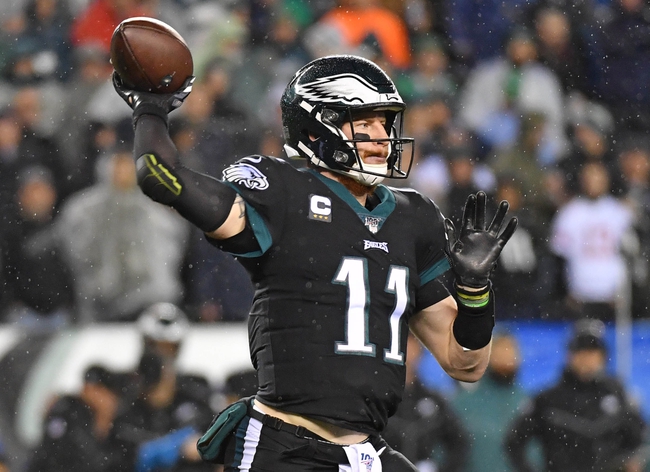 The Philadelphia Eagles head to Washington D.C. on Sunday for a game against their division rival, the Washington Redskins.  The Eagles enter Sunday’s game after winning their last game in an overtime thriller against the New York Giants by the score of 23-17.  In the game against New York, Philadelphia quarterback Carson Wentz completed 33 of 50 passes for 325 yards and 2 touchdowns.  Running back Boston Scott had a hard time rushing in the game but led the Eagles on the ground with 10 carries for 59 yards and a touchdown.  Tight end Zach Ertz led the Eagles in receiving as he caught 9 passes for 91 yards and 2 touchdowns in the game.  The Eagles offense gained a total of 418 yards against the Giants while allowing 255 yards.

After the win, the Eagles are now 6-7 on the season which places them in a 1st place tie in the NFC East.  Quarterback Carson Wentz has thrown for 3,165 yards and 22 touchdowns this season against 7 interceptions on the year.  Miles Sanders has been the Eagles leading rusher as he as carried the ball 131 times for 565 yards and 1 touchdown on the season.  The lead receiver for Philadelphia is tight end Zach Ertz who has caught 79 passes for 827 yards and 5 touchdowns on the year.  Philadelphia enters Sunday’s game pretty banged up as they have 5 players listed on their injury report as Kamu Grugier-Hill, Alshon Jeffery, Nelson Agholor, Jalen Mills and Lane Johnson are all listed a questionable.

The Washington Redskins welcome the Philadelphia Eagles into town on Sunday after losing their last game to the Green Bay Packers by the score of 20-15.  Redskins quarterback Dwayne Haskins completed 16 of 27 passes for 170 yards and 1 touchdown as well as 1 interception.  Running back Adrian Peterson led Washington on the ground, rushing 20 times for 76 yards and a touchdown.  Terry McLaurin was the leading receiver for the Redskins as he caught 4 passes for 57 yards and a touchdown.  The Redskins offense gained a total of 262 yards in the game, while their defense allowed 341 yards.

With the loss against Green Bay, Washington is now 3-10 on the season which places them in 3rd place in the NFC East and are simply trying to play spoiler for the rest of the season, while also giving playing time to rookie quarterback Dwayne Haskins.  Haskins has now thrown for 971 yards this season and has thrown 3 touchdowns as well as 7 interceptions.  Adrian Peterson has been the leading rusher for the Redskins this season as he has rushed 167 times for 718 yards and 3 touchdowns on the year.  Washington’s leading receiver is Terry McLaurin who has caught 46 passes for 703 yards and 6 touchdowns this season.  The Redskins enter Sunday’s game with 5 players listed on their injury report as Ryan Anderson is listed as questionable while Derrius Guice, Ryan Kerrigan, Trey Quinn and Paul Richardson Jr. are all listed as out.