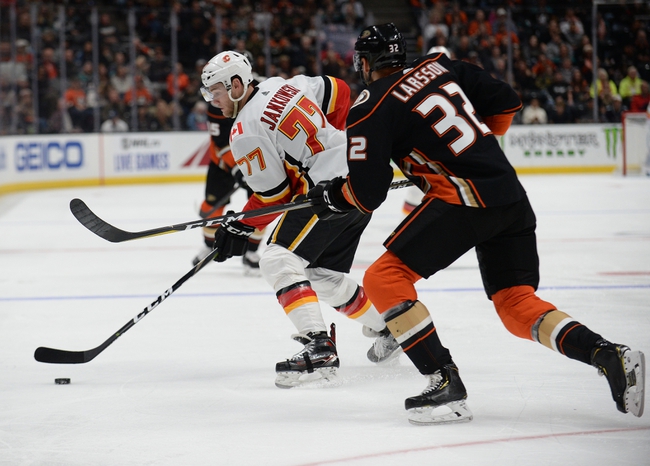 The Calgary Flames and the Anaheim Ducks meet in NHL action from the Honda Center on Thursday night.

The Calgary Flames will look to rebound from a 5-3 loss to Los Angeles in their last outing. The game was scoreless through the opening 20 minutes before Mikael Backlund gave Calgary the lead just after the midway point of the 2nd period. Los Angeles tied the game at one just :44 later and Austin Wagner gave the Kings a 2-1 lead just :39 after that. Kurtis MacDermid pushed the lead to 3-1 1:42 into the 3rd, but Elias Lindholm would pull a goal back just 1:43 later. L.A. re-took the two-goal lead before Lindholm restored the goal again just 1:43 later. Los Angeles iced the win with an empty-netter in the dying second of the game to lock up the win and send Calgary back empty-handed. David Rittich took the loss, falling to 22-15-5 on the year after stopping 28 of 32 shots faced in the losing effort.

The Anaheim Ducks come into the game with a bit of rest that came in an unfortunate situation as the Ducks had their last game with St. Louis postponed after St. Louis’ Jay Bouwmeester suffered a cardiac episode on the bench and had to be transported to hospital, which thankfully news came out today that he’s expected to recover after such a scary incldent. Only time will tell if the Ducks are able to move past it pretty quickly, or if the Ducks will have come lingering effects after having all of this happen in any given night.

There are certain trends that I try to get myself to not read into, but the Flames have won just twice in their last 34 games in Anaheim. Even with roster turnover, that’s downright nuts. Calgary has been playing well, but Anaheim has been playing pretty well themselves all things considered, and I thik with the loe line, the Ducks have to be worth a look here.