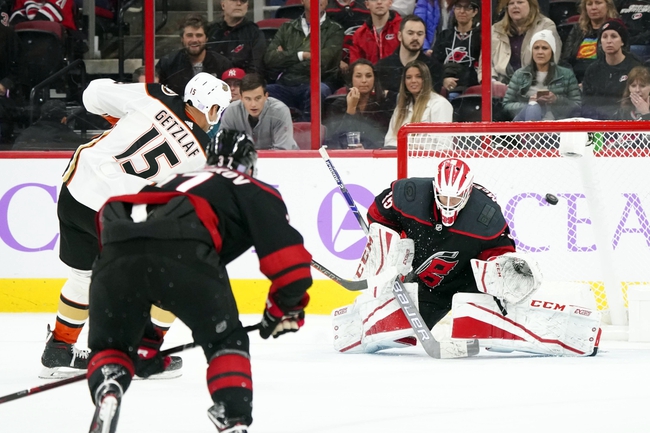 The Carolina Hurricanes look to bounce back from a loss when they visit the Anaheim Ducks on Friday. The Hurricanes lost to the San Jose Sharks 5-2 on Wednesday in the second game of their current West Coast road trip. Scoring in the loss for Hurricanes were Erik Haula and Dougie Hamilton, while James Reimer made 17 saves in net.

Erick Haula leads Carolina in goals scored with six while Andrei Svechnikov is the assists leader with seven and Dougie Hamilton leads in points with nine. Petr Mrazek is 4-0-0 in net for the Hurricanes with goals against of 1.94 and .919 saves percentage. Carolina is scoring an average of 3.38 goals per game, while allowing an average of 2.63 per game.

Anaheim looks to win its second straight when hosting the Hurricanes on Friday. The Ducks defeated the Buffalo Sabres on Wednesday 5-2 on their home ice. Adam Henrique scored two goals, while Jakob Silfverberg scored one goal and added two assists helping the Ducks move to 5-2-0 on the season and just two points behind first place Edmonton in the Pacific Division.

Adam Henrique leads Anaheim in goals scored with four. Hampus Lindholm leads the Ducks in assists with four, while Jakob Silfverberg leads in points with six. In net, John Gibson is 4-2-0 with goals against of 1.85 and save percentage of .941. The Ducks are scoring an average of 2.22 goals per game while allowing an average of 1.20 per game.

The UNDER has cashed in 5 of the Ducks last 7

Anaheim has jumped out to a strong 5-2-0 start and trails first place Edmonton by just two points. The Ducks have won 5 of the last 6 head-to-head with the Hurricanes and 6 of the last 8 on their home ice against Carolina. The Hurricanes are playing their third game of a west coast road trip giving the Ducks an added advantage playing at home. Final Score Prediction, Anaheim Ducks win 6-3