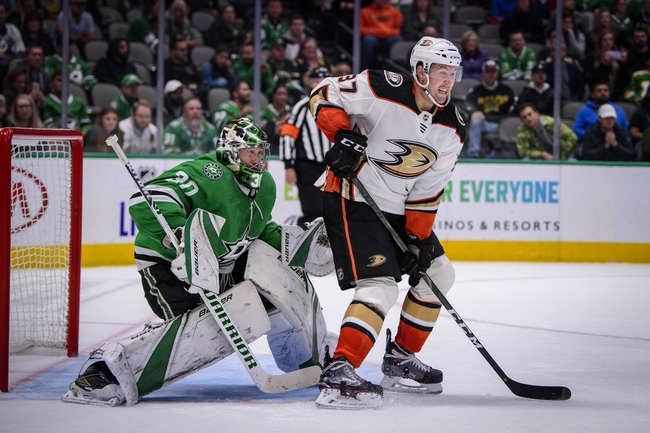 The Dallas Stars play the Anaheim Ducks on Thursday night but first must face the Los Angeles Kings on Wednesday in a matchup of teams from the Western Conference.  In their last game, the Stars defeated the Detroit Red Wings by the score of 4-1.  Dallas received goals from Roope Hintz, Radek Faksa, Joe Pavelski and Andrej Sekera in the win.  Stars goalie Anton Khudobin got the start in net for Dallas and recorded the win, making saves on 22 of the 23 Detroit shots on the night.

With the win against Detroit, the Stars are now 24-14-4 on the season which is good enough for Dallas to be in 3rd place in the Central Division. Tyler Seguin leads Dallas in points with 32 and assists with 21 on the year. Roope Hintz leads the Stars in goals with 14 on the season including 1 on the power play. Goalie Ben Bishop is currently 14-9-3 with 1 shutout and a goals against average of 2.33.  Backup goalie Anton Khudobin is 10-5-1 with a goals against average of 2.20. The Stars come into Wednesday’s game with 3 players listed on their injury report as Corey Perry is suspended, John Klingberg is day to day and Stephen Johns is on injured reserve.

The Anaheim Ducks welcome the Dallas Stars to town on Thursday after losing their last game to the Columbus Blue Jackets by the score of 4-3.  Anaheim received goals from Ryan Getzlaf and 2 goals from Ondrej Kase but it wasn’t enough to keep up with the Columbus offense.  Ducks goalie Ryan Miller got the start in net for Anaheim and took the loss, allowing 3 goals on 26 of the Blue Jackets’ shots in the game.

With the loss against the Blue Jackets, the Ducks are now 17-21-5 on the season and are currently in 7th place in the Pacific Division.  Veteran center Ryan Getzlaf continues to be the most productive player for the Ducks are he leads the team in points with 30.  Getzlaf also leads Anaheim in assists with 19.  Jakob Silfverberg leads the Ducks in goals on the season as he has scored 15, with 3 coming while on the power play.  Goalie John Gibson is 13-16-3 on the year with 1 shutout and a goals against average of 2.95.  Backup goalie Ryan Miller is 4-5-2 on the season with a goals against average of 3.20.  The Ducks enter Thursday’s game with 5 players on their injury report as Ondrej Kase and Jakob Silfverberg are listed as day to day, Korbinian Holzer is listed as out, while Troy Terry and Rickard Rakell are both listed on injured reserve.

As of Wednesday, the Dallas Stars have averaged 2.69 goals per game this season while allowing 2.43 goals per game.  The Anaheim Ducks have scored 2.53 goals per game while allowing 3.14 goals per game.  In their last 5 games, the Stars have gone 4-1 and have won 4 games in a row while the Ducks have gone 1-4.  These two teams have met once so far this season with the Stars coming out on top by the score of 2-1 in a game played in Dallas.  The Stars have won 2 of the last 3 meetings against the Ducks and have won by the average score of 3.33 to 3.  I am going to go with the Stars in this one as they have been the better team all season and have better stats at both ends of the ice.  Dallas wins this one 3-1.