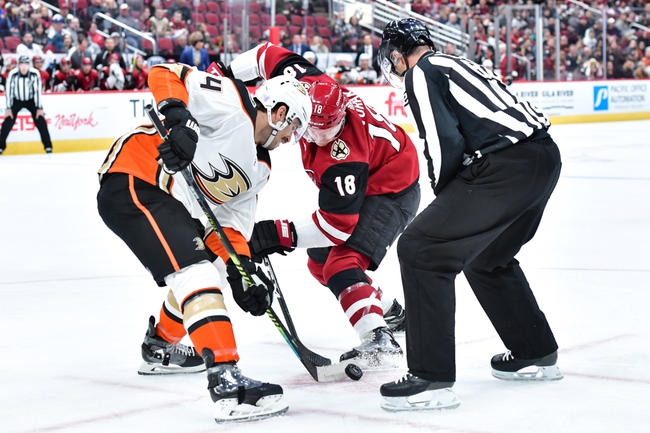 Anaheim and Arizona find themselves at opposite ends of the West's Pacific Division heading into their Thursday night tilt. The Coyotes are in second place, while the Ducks are in second to last.

The Ducks have had a difficult time finding the net this season, with the second-least amount of goals in the NHL, with 103. Anaheim has been especially bad on the road, with a 6-12-2 away record. The Ducks played at Arizona on November 27 and narrowly dropped that game, falling in a shootout.

Surprisingly, left winger Jakob Silfverberg's 13 goals and assists give him the team lead for Anaheim with just 26 points. Outside of him, only three other Ducks have scored at least 10 goals.

It's not a bad time for Anaheim to get Arizona, who has lost four of its last five games. The Coyotes did get a 3-1 win over St. Louis on Tuesday night and look to not lose any more footing near the top of the division. The win stopped an eight-game streak for the Blues and saw two third-period goals for Arizona.

The Coyotes are the top defensive team in the Pacific, with just 108 goals allowed. Only five teams in the NHL have allowed fewer goals.

Center Nick Schmaltz has an interesting goals to assists ratio on the season, with six goals and 25 helpers. His best season mark for points is 52, but he's on pace for 62 this year. He has seven goals in the last five matches.

The Ducks are horrible this year and unable to do anything offensively at all. Look for that issue to be compounded even further against the very good Coyotes defense. The Coyotes are able to take advantage of the weaker offense of Anaheim as well to bring up some major offensive pressure in this game against the Ducks. Final Score Prediction, Arizona Coyotes win 3-1.