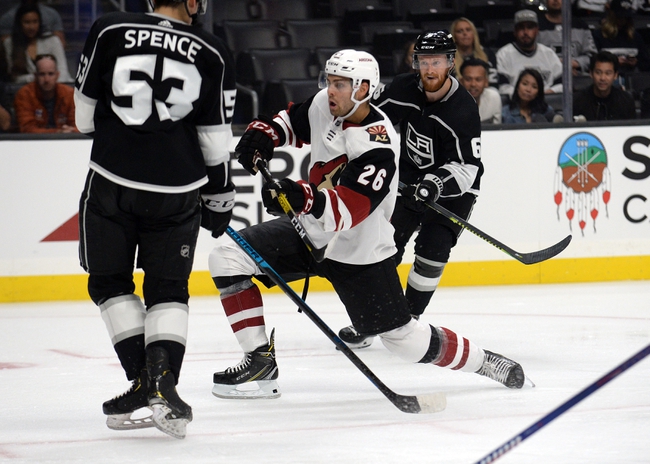 The Los Angeles Kings travel to Glendale, AZ on Thursday for a game against the Coyotes but first must play the Tampa Bay Lightning on Wednesday.  In their last game, the Kings were defeated by the Philadelphia Flyers by the score of 4-1.  The Kings received their lone goal in the game from Dustin Brown at 5:06 of the 3rd period on a goal that was score unassisted.  Jack Campbell took the loss in net for the Kings as he allowed 4 goals on 26 of the Flyers’ shots on the night.

The Arizona Coyotes welcome the Los Angeles Kings to town on Thursday after losing their last game by the score of 7-3 against the Edmonton Oilers.  The Coyotes received goals in the game from Taylor Hall and Christian Dvorak but were never very competitive as their goals didn’t come until they were already down 5-0.  Both of Arizona’s goalies saw action in the game as Antti Raanta allowed 6 goals on 18 shots, while Adin Hill made saves on all 8 shots that he saw in the game.

With the loss against Edmonton, the Coyotes are now 26-20-5 on the season which places them in 3rd place in the Pacific Division.  Nick Schmaltz leads the Coyotes in points with 35 and in assists with 28 on the season.  The Arizona leader in goals is Conor Garland who has recorded 16 goals on the season, including 3 on the power play.  Goalie Adin Hill has a record of 2-2-1 with a goals against average of 2.40.  Goalie Antti Raanta is 9-10-2 on the year with 1 shutout and a goals against average of 2.94.  The Coyotes enter Thursday’s game with 3 players listed on their injury report as Darcy Kuemper is out, Barrett Hayton is day to day and Brad Richardson is on injured reserve.