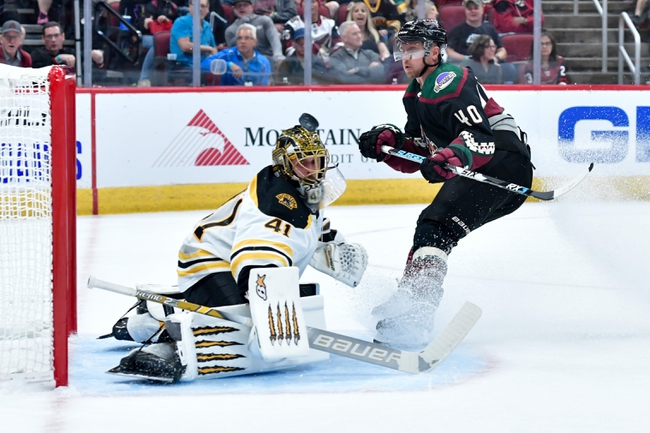 The Arizona Coyotes travel to Boston, MA on Saturday for a game against the Bruins in a matchup of teams from the Western and Eastern Conference.  In their last game, Arizona was defeated by the Carolina Hurricanes by the score of 5-3.  The Coyotes received goals from Conor Garland, Christian Dvorak and Alex Goligoski but it wasn’t enough to pull out a win against the Hurricanes.  Arizona goalie Antti Raanta started in net for Arizona but came away with a loss after allowing 4 goals on 30 shots in the game.

With the loss against Carolina, the Coyotes are now 27-22-7 on the season which places them in 4th place in the Pacific Division.  Nick Schmaltz leads the Coyotes in points with 39 and in assists with 31 on the season.  The Arizona leader in goals is Conor Garland who has recorded 19 goals on the season, including 3 on the power play.  Goalie Adin Hill has a record of 2-2-2 with a goals against average of 2.48.  Goalie Antti Raanta is 10-12-3 on the year with 2 shutouts and a goals against average of 2.86.  The Coyotes enter Saturday’s game with 4 players listed on their injury report as Darcy Kuemper and Jason Demers are on injured reserve while Barrett Hayton and Oliver Ekman-Larsson are listed as out.

The Boston Bruins welcome the Arizona Coyotes to town on Saturday after winning their last game against the Chicago Blackhawks by the score of 2-1 in overtime.  The Bruins received their lone goal in regulation from Sean Kuraly and their game winning goal in overtime from Charlie McAvoy. Boston goalie Jaroslav Halak was in net for the Bruins and recorded the win, making saves on 21 of 22 Chicago shots on the night.

The Bruins are currently 33-10-12 on the season and are currently in 1st place in the Atlanta Division. David Pastrnak leads the Bruins in points with 75 on the season.  Pastrnak also leads the Bruins in goals on the year as he has recorded 38 on the season.  Brad Marchand is Boston’s leader in assists with 46 on the year.  The goalies for Boston have been strong all season as Tuukka Rask is currently 19-4-6 with 3 shutouts and a goals against average of 2.15.  Backup goalie Jaroslav Halak currently has a record of 14-6 -6 with 3 shutouts and a goals against average of 2.36.  The Bruins currently have 1 players listed on their injury report as Joakim Nordstrom and Danton Heinen are both day to day.