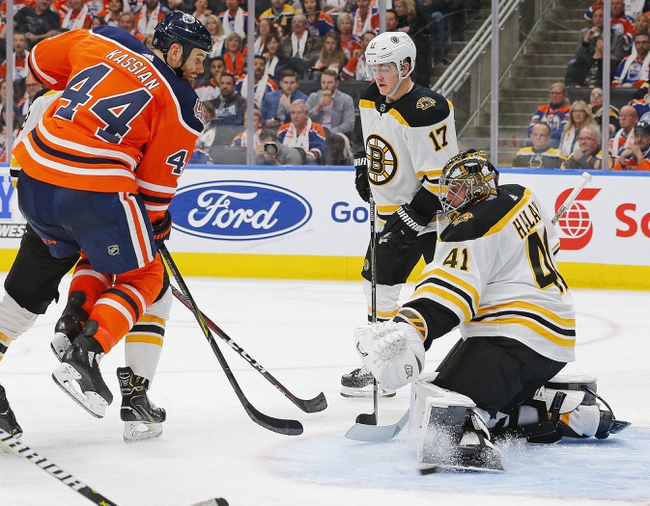 The Edmonton Oilers head to Boston, MA on Saturday for a game against the Bruins in a matchup of teams from the Western and Eastern Conference.  In their last game, the Oilers were defeated by the Buffalo Sabres by the score of 3-2 in overtime.  The Oilers received goals from Riley Sheahan and Ryan Nugent-Hopkins, but it wasn’t enough to pull out a win against the Sabres.  Edmonton goalie Mike smith took the loss in net for the Oilers as he allowed 3 goals on the 26 shots he faced against BUffalo.

After the loss to Buffalo, Edmonton is now 21-17-5 on the season and is currently in 4th place in the Pacific Division.  The Edmonton offense runs through Connor McDavid who leads the Oilers in points with 64 and assists with 42 on the season.  The leading goal scorer for the Oilers is Leon Draisaitl who has scored 23 goals this season.  Edmonton’s goalies have been decent overall so far on the year with Mike Smith recording a record of 7-9-3, with 1 shutout and goals against average of 3.11.  Mikko Koskinen has a record of 14-8-2 with 1 shutout and a goals against average of 2.85. Edmonton enters Saturday’s game with 1 player listed on their injury report as Oscar Klefbom is listed as day to day.

The Boston Bruins welcome the Edmonton Oilers to town after losing their last game by the score of 2-1 in overtime against the Columbus Blue Jackets.  The Bruins received their lone goal from David Pastrnak on the power play at 11:07 of the 2nd period with assists from Torey Krug and Patrice Bergeron. Boston goalie Tuukka Rask was saddled with the loss in net against Blue Jackets, allowing 2 goals on 33 shots.

The Bruins are currently 24-7-11 on the season and are currently in 1st place in the Atlanta Division. David Pastrnak leads the Bruins in points with 60 on the season.  Pastrnak also leads the Bruins in goals on the year as he has recorded 30 on the season.  Brad Marchand is Boston’s leader in assists with 39 on the year.  The goalies for Boston have been strong all season as Tuukka Rask is currently 15-4-6 with 2 shutouts and a goals against average of 2.30.  Backup goalie Jaroslav Halak currently has a record of 9-3-5 with 3 shutouts and a goals against average of 2.20.  The Bruins have 5 players listed on their injury report as Anton Blidh and Charlie McAvoy are on injured reserve, Jakub Lauko and Connor Clifton are listed as out and David Krejci is listed as day to day.