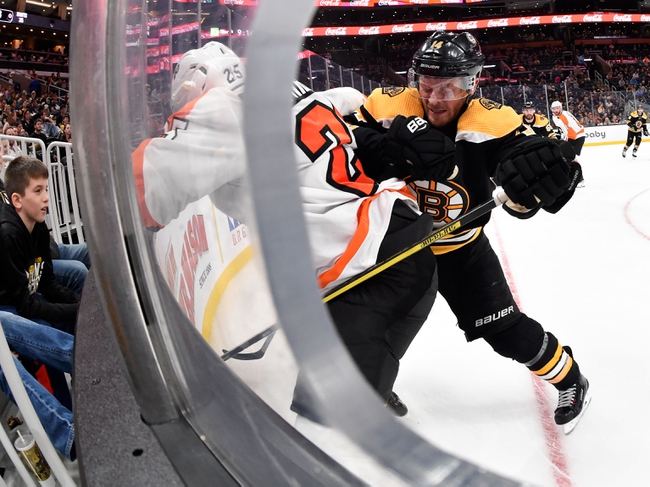 As of Saturday, the Flyers are 8-5-2 on the season and seem to be hitting their stride as a team and have 3 of their last 4 games.  Travis Konecny leads the Flyers in points with 16, in goals with 7 and assists with 9. Carter Hart is 5-3-1 with 1 shutout and a goals against average of 2.82.  Backup goalie Brian Elliot is 3-2-1 on the year with a goals against average of 3.05.  The Flyers come into this game with just one player listed on their injury report as defenseman Samuel Morin is listed as out.

The Boston Bruins welcome the Flyers into town after losing their last game to the Detroit Red Wings by the score of 4-2.  Boston has a rough night against a subpar Detroit team as they allowed 2 power play goals on the night.  Boston received goals from David Krejci and Torey Krug but it wasn’t enough to beat the Red Wings.  Boston goalie Tuukka Rask allowed 3 goals on the 31 Detroit shots that he faced on the night.

The Bruins are currently 11-3-2 on the season and are currently in first place in the Atlanta Division.  David Pastrnak leads the Bruins in points with 31 and goals with 15.  Brad Marchand leads the Bruins in assists with 18 and has also scored 10 goals on the season.  The goalies for Boston have been strong all season as Rask is currently 7-2-1 with a goals against average of 1.99.  Backup goalie Jaroslav Halak currently has a record of 4-1-1 and a goals against average of 2.82.  The Bruins have 5 players listed on their injury report as Brett Ritchie, David Backes and Jason DeBrusk are all listed as out while Joakim Nordstrom and Kevan Miller are on injured reserve.