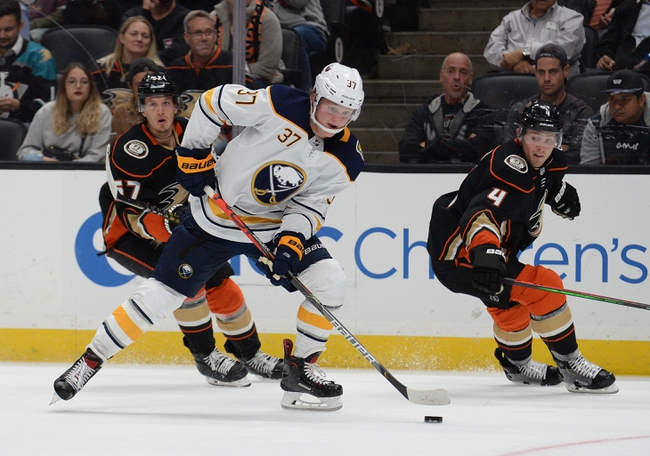 The Anaheim Ducks make their way to Buffalo, NY on Sunday for a game against the Sabres in a matchup of teams from the Western and Eastern Conference.  In their last game, the Ducks were defeated by the Toronto Maple Leafs by the score of 5-4 in overtime.  Anaheim received goals from Nicolas Deslauriers, Max Jones, Adam Henrique and Derek Grant but it wasn’t enough to pull out a win.  Ducks goalie Ryan Miller got the start in net for Anaheim and recorded the loss, allowing 5 goals on 35 Toronto shots in the game.

With the loss against the Maple Leafs, the Ducks are now 22-26-7 on the season and are currently in 7th place in the Pacific Division.  Veteran center Ryan Getzlaf continues to be the most productive player for the Ducks are he leads the team in points with 36.  Getzlaf also leads Anaheim in assists with 25.  Adam Henrique leads the Ducks in goals on the season as he has scored 18, with 4 coming while on the power play.  Goalie John Gibson is 16-21-4 on the year with 1 shutout and a goals against average of 2.96.  Backup goalie Ryan Miller is 6-5-3 on the season with a goals against average of 2.99.  The Ducks enter Saturday’s game with 1 player listed on their injury report as Erik Gudbranson is day to day.

The Buffalo Sabres welcome the Anaheim Ducks to town on Sunday after winning their last game against the New York Rangers by the score of 3-2.  Buffalo received goals from Zamgus Girgensons, Sam Reinhart and Jimmy Vesey on their way to the win.  Buffalo goalie Carter Hutton got the start in net and recorded the win, as he made saves on 37 of 39 New York shots in the game.

After the win against the Rangers, the Sabres are now 24-23-8 on the season, placing them in 6th place in the Atlantic Division.  Offensively the Sabres are led by Jack Eichel, who has recorded team highs in points with 68, goals with 31, and assists with 37. 7 of Eichel’s goals have come while on the power play as well as recording 13 assists while on the man advantage and he is clearly Buffalo’s biggest offensive threat. Buffalo goaltender Carter Hutton is 8-9-4 with 2 shutouts and a goals against average of 3.24.  Jonas Johansson is 0-0-1 on the season with 2.58 goals against average.  Buffalo enters Sunday’s game with 6 players listed on their injury report as Linus Ullmark, Kyle Okposo and Victor Olofsson are on injured reserve while Cutis Lazar, Johan Larsson and Rasmus Dahlin are day to day.