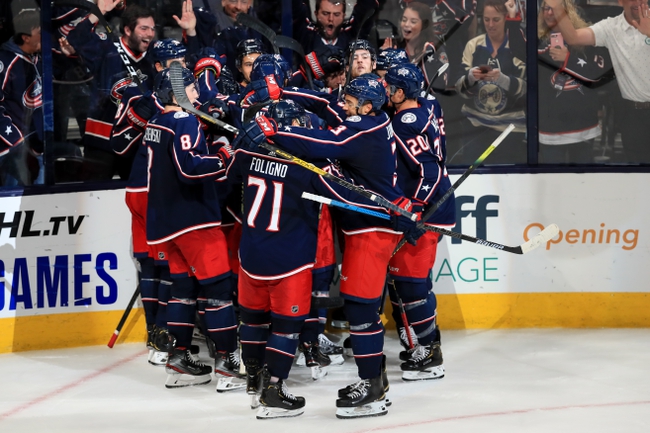 The Columbus Blue Jackets travel to Buffalo, NY on Saturday for a game against the Sabres in a matchup of teams from the Eastern Conference.  In their last game, the Blue Jackets defeated the Winnipeg Jets by the score of 4-3.  Columbus received 2 goals from Oliver Bjorkstrand to go along with goals from Seth Jones and Gustav Nyquist on their way to the win.  Columbus goalie Elvis Merzlikins started in net for the Blue Jackets and picked up the win, making saves on 27 of 30 Winnipeg shots on the night.

Heading into Saturday’s game, the Blue Jackets are 27-16-8 and are currently in 4th place in the Metropolitan Division. The Blue Jackets leader in points is Pierre-Luc Dubois who has recorded 38 so far this season.  The Blue Jackets are also led in assists by Dubois who has 23 assists with 8 coming while on the power play.  The Columbus goals leader is Oliver Bjorkstrand who has 16 goals on the season.  Columbus goalie Matiss Kivlenieks is 1-0-0 on the season with a goals against average of 1.00.  Meanwhile, goalie Elvis Merzlikins is 9-6-4 with 3 shutouts and a goals against average of 2.39 on the season.  The Blue Jackets come into Saturday’s game with 1 player listed on their injury report as Josh Anderson is on injured reserve.

The Buffalo Sabres welcome the Columbus Blue Jackets to town on Saturday after losing their last game against the Montreal Canadiens by the score of 3-1.  Buffalo received their lone goal in the game from Jack Eichel on the power play at 7:11 of the 1st period with assists from Rasmus Dahlin and Marcus Johansson.  Carter Hutton started in net for the Sabres and allowed 2 goals on 29 of the Canadiens shots in the loss.

After the loss against the Canadiens, the Sabres are now 22-22-7 on the season, placing them in 6th place in the Atlantic Division.  Offensively the Sabres are led by Jack Eichel, who has recorded team highs in points with 64, goals with 30, and assists with 34. 7 of Eichel’s goals have come while on the power play as well as recording 13 assists while on the man advantage and he is clearly Buffalo’s biggest offensive threat. Buffalo goaltender Carter Hutton is 6-8-4 with 2 shutouts and a goals against average of 3.24.  Linus Ullmark is 16-14-3 on the season with 1 shutout and a 2.72 goals against average.  Buffalo enters Saturday’s game with 5 players listed on their injury report as Linus Ullmark, Vladimir Sobotka and Victor Olofsson are on injured reserve, Kyle Okposo is out and Zach Bogosian is day to day.