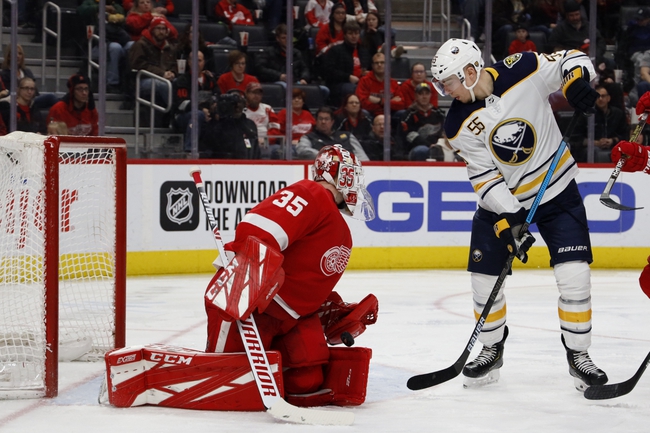 The Detroit Red Wings travel to Buffalo, NY on Thursday for a game against the Sabres in a matchup of teams from the Atlantic Division in the Eastern Conference.  In their last game, Detroit was defeated by the Philadelphia Flyers by the score of 3-0. The Red Wings were only able to put a total of 16 shots on net in the game and were never able to get one past Flyers’ goalie Brian Elliot.  Detroit goalie Jonathan Bernier got the start in net for the Red Wings and took the loss, allowing 2 goals on 28 shots.

On the year the Red Wings are 12-38-4 and are in 8th place in the Atlantic Division.  The Red Wings are led in points and goals by Dylan Larkin who has 37 points this season. Tyler Bertuzzi leads Detroit in goals on the season with 17, including 2 while on the power play.  The Red Wings are also led in assists by Larkin who has tallied 24 on the year with 4 coming while on the power play.  Detroit goalie Jonathan Bernier is 10-14-2 with 1 shutout and a 2.89 goals against average this season.  Jimmy Howard is 2-20-2 with a goals against average of 4.12 so far this year.  Detroit enters Thursday’s game with 5 players listed on their injury report as Filip Zadina, Mike Green, Frans Nielsen and Anthony Mantha are on injured reserve while Trevor Daley is day today.

The Buffalo Sabres welcome the Detroit Red Wings to town on Thursday after losing their last game against the Colorado Avalanche by the score of 6-1.  Buffalo received their lone goal in the game from Sam Reinhart at 19:59 of the 1st period with assists from Jake McCabe and Jack Eichel.  Both Buffalo goalies saw action in the game as Carter Hutton allowed 5 goals on 13 shots while Jonas Johansson allowed 1 goal on 14 of the shots that he saw from the Avalanche.

After the loss against the Avalanche, the Sabres are now 23-23-7 on the season, placing them in 6th place in the Atlantic Division.  Offensively the Sabres are led by Jack Eichel, who has recorded team highs in points with 66, goals with 31, and assists with 35. 7 of Eichel’s goals have come while on the power play as well as recording 13 assists while on the man advantage and he is clearly Buffalo’s biggest offensive threat. Buffalo goaltender Carter Hutton is 7-9-4 with 2 shutouts and a goals against average of 3.30.  Jonas Johansson is 0-0-0 on the season with 2.03 goals against average.  Buffalo enters Thursday’s game with 6 players listed on their injury report as Linus Ullmark and Victor Olofsson are on injured reserve while Brandon Montour, Curtis Lazar, Johan Larsson and Rasmus Dahlin are day to day.