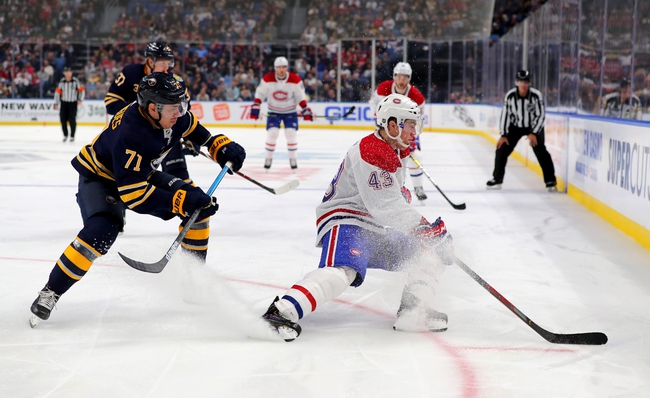 The Montreal Canadiens head to Buffalo, NY on Thursday for a game against the Sabres in a matchup of two teams in the Atlantic Division in the Eastern Conference.  In their last game, the Canadiens were defeated by the Washington Capitals by the score of 4-2.  The Canadiens received goals from Jeff Petry and Dale Weise, but it wasn’t enough to come out on top against the Capitals.  Montreal goalie Carey Price took the loss in net as he allowed 3 goals on 39 Washington shots in the game.

After the loss against Washington, Montreal is 22-22-7 which puts them in a 5th place in the Atlantic Division.  The Canadiens are led in points by Tomas Tatar as he has recorded 44 points on the season.  Tatar also leads Montreal in goals this season with 17.  Tatar is also the assists leader for the Canadiens as he has recorded 27 on the year.  Goalie Carey Price is currently 20-17-4, with 2 shutouts on the season and has a goals against average of 2.85.  The Canadiens other goalie is Charlie Lindgren who has a record of 0-3-0 with a goals against average of 3.40.  Montreal enters their game against Buffalo with 5 players listed on their injury report as Maxi Domi, Artturi Lehkonen and Brendan Gallagher are day to day while Jonathan Drouin and Paul Byron are on injured reserve.

The Buffalo Sabres welcome the Montreal Canadiens to town on Thursday after losing their last game against the Ottawa Senators by the score of 5-2.  Buffalo received goals from Sam Reinhart and Jack Eichel, but it wasn’t enough to escape with a win.  Both of Buffalo’s goalies saw action in the game as Linus Ullmark allowed 3 goals on 33 shots before giving way to Carter Hutton who made saves on all 4 of the shots that he faced against the Senators.

After the loss against the Senators, the Sabres are now 22-21-7 on the season, placing them in 5th place in the Atlantic Division.  Offensively the Sabres are led by Jack Eichel, who has recorded team highs in points with 63, goals with 29, and assists with 34. 6 of Eichel’s goals have come while on the power play as well as recording 13 assists while on the man advantage and he is clearly Buffalo’s biggest offensive threat. Buffalo goaltender Carter Hutton is 6-7-4 with 2 shutouts and a goals against average of 3.31.  Linus Ullmark is 16-14-3 on the season with 1 shutout and a 2.72 goals against average.  Buffalo enters Thursday’s game with 4 players listed on their injury report as Jeff Skinner, Vladimir Sobotka and Victor Olofsson on injured reserve and Linus Ullmark is day to day.