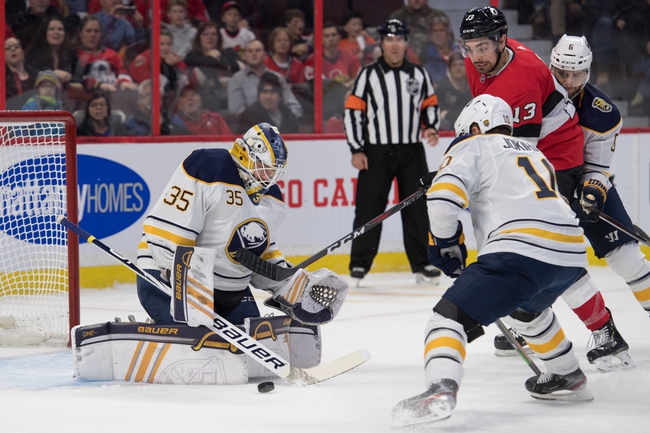 The Ottawa Senators travel to Buffalo, NY on Tuesday for a game against the Sabres but first must play the New Jersey Devils on Monday night.  In their last game, Ottawa defeated the Calgary Flames by the score of 5-2.  The Senators received goals from Brady Tkachuk, Chris Tierney, Connor Brown, Colin White and Vladislav Namestnikov on their way to the win.  Senators goalie Marcus Hogberg started in net for his team and recorded the win, making saves on 40 of the 42 Calgary shots that he faced in the game.

With the win against Calgary, Ottawa is 17-23-8, for a total of 42 points which puts them in 7th place in the Atlantic Division.  Ottawa has been led in points and goals by Anthony Duclair, who has 33 points and 21 goals on the season. Thomas Chabot leads the Senators in assists with 23, with 8 coming while on the power play.  Goalie Marcus Hogberg has a record of 2-2-2 and currently has a goals against average of 2.91.  Craig Anderson has a record of 6-12-1 with a goals against average of 3.32.  Ottawa comes into Monday’s game with no injured listed on their injury report.

The Buffalo Sabres welcome the Ottawa Senators to town on Tuesday after losing their last game against the Nashville Predators by the score of 2-1.  Buffalo received their lone goal in the game from Sam Reinhart at 18:58 of the 1st period with assists from Rasmus Dahlin and Jake McCabe.  Goalie Linus Ullmark recorded the loss in net for Buffalo, allowing 2 goals on 37 Nashville shots on the night.

After the loss against the Predators, the Sabres are now 22-20-7 on the season, placing them in 5th place in the Atlantic Division.  Offensively the Sabres are led by Jack Eichel, who has recorded team highs in points with 62, goals with 28, and assists with 34. 6 of Eichel’s goals have come while on the power play as well as recording 13 assists while on the man advantage and he is clearly Buffalo’s biggest offensive threat. Buffalo goaltender Carter Hutton is 6-7-4 with 2 shutouts and a goals against average of 3.34.  Linus Ullmark is 16-13-3 on the season with 1 shutout and a 2.70 goals against average.  Buffalo enters Tuesday’s game with 1 player listed on their injury report as Jeff Skinner is on injured reserve.