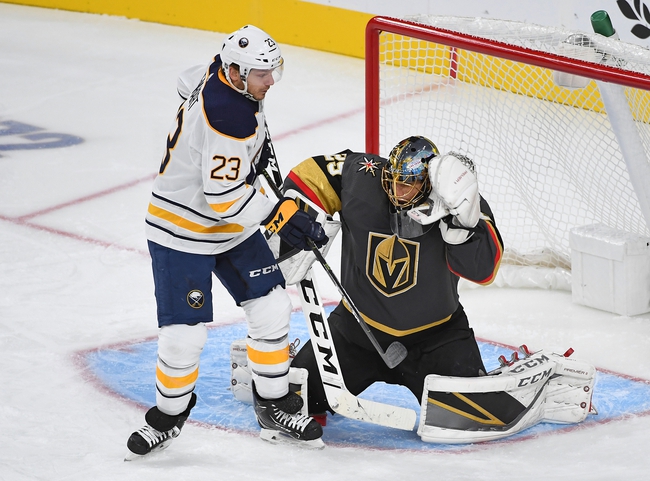 The Vegas Golden Knights travel to Buffalo, NY on Tuesday for a game against the Sabres in a matchup of teams from the Western and Eastern Conference.  In their last game, Vegas was defeated by the Columbus Blue Jackets by the score of 3-0.  The Golden Knights were able to put a total of 27 shots on new against the Blue Jackets but were never able to get one past Columbus goalie Elvis Merzlikins.  Marc-Andre Fleury started in net for Vegas and took the loss, allowing goals on 3 of the 22 Blue Jackets shots on the night.

After the loss against Columbus, Vegas is now 24-18-6 and are currently in 3rd place in the Pacific Division.  Max Pacioretty leads the Golden Knights in points on the year with 45.  Pacioretty also leads Vegas in goals with 20 on the season, with 5 goals coming while on the power play. Mark Stone leads Vegas in assists with 27 on the season.  Vegas goalie Marc-Andre Fleury is currently 18-10-3 with 2 shutouts and a goals against average of 2.84 this season.  Meanwhile, backup goalie Malcolm Subban is 6-7-3 with a goals against average of 3.04. The Knights come into Tuesday’s game with 2 players listed on their injury report as Cody Glass and Jonathan Marchessault are all listed as day to day.

The Buffalo Sabres welcome the Vegas Golden Knights to town on Tuesday after winning their last game against the Detroit Red Wings by the score of 5-1.  Buffalo received goals Zemgus Girgensons, Zach Bogosian, Rasmus Ristolainen and 2 goals from Evan Rodrigues on their way to the win.  Goalie Linus Ullmark recorded the win in net for Buffalo, making saves on 21 of 22 Detroit shots on the night.

After the win against the Red Wings, the Sabres are now 20-19-7 on the season, placing them in 5th place in the Atlantic Division.  Offensively the Sabres are led by Jack Eichel, who has recorded team highs in points with 59, goals with 27, and assists with 32. 6 of Eichel’s goals have come while on the power play as well as recording 12 assists while on the man advantage and he is clearly Buffalo’s biggest offensive threat. Buffalo goaltender Carter Hutton is 6-7-4 with 2 shutouts and a goals against average of 3.34.  Linus Ullmark is 14-12-3 on the season with 1 shutout and a 2.81 goals against average.  Buffalo enters Tuesday’s game with 2 players listed on their injury report as Jake McCabe is listed as day to day while Victor Olofsson is on injured reserve.