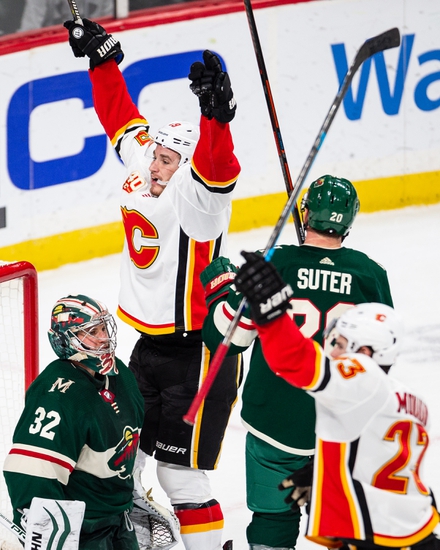 The Minnesota Wild head to Calgary, Alberta on Thursday for a game against the Flames in a matchup of teams from the Western Conference.  In their last game, the Wild were defeated by the Flames by the score of 5-4 in a shootout.  The Wild received goals from Kevin Fiala, Jordan Greenway and 2 goals from Marcus Foligno but it wasn’t enough to pull out the win.  Minnesota goalie Alex Stalock took the loss in net for the Wild as he allowed 4 goals on 37 Calgary shots in the game.

The Calgary Flames welcome the Minnesota Wild to town on Thursday after winning their last game against the Chicago Blackhawks by the score of 2-1.  The Flames received both goals in the game from Elias Lindholm in the second period.  Matthew Tkachuk also was a big contributor for Calgary as he had assists on both of Lindholm’s goals.  Flames goalie Cam Talbot recorded the win in net for the Flames as he made saves on 31 of 32 Chicago shots on the night.

After the win against the Blackhawks, the Flames are 23-17-5 and are currently in 3rd place in the Pacific Division. The Flames offense is led in points by Matthew Tkachuk who has tallied 38 points so far on the season.  Johnny Gaudreau leads the Flames in assists on the year with 24, with 8 coming on the power play.  Elias Lindholm leads the Flames in goals on the year with 18, with 6 coming while on the power play.  Calgary goalie David Rittich is 18-10-5 on the year with 2 shutouts and a 2.81 goals against average.  Backup goalie Cam Talbot is 5-7-0 so far this season with a goals against average of 2.62.  The Flames come into Thursday’s game with a clean bill of health as they do not have anyone listed on their injury report.