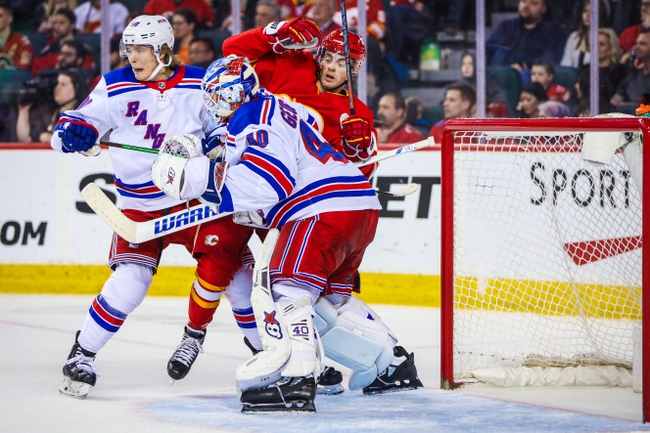 The New York Rangers head to Calgary, AB on Thursday for a game against the Flames in a matchup of teams from the Eastern and Western Conference.  New York comes into the game after losing their last contest against the Edmonton Oilers by the score of 7-5.  The Rangers received goals from Chris Kreider, Ryan Strome, Marc Staal, Artemi Panarin and Mika Zibanejad but it wasn’t enough to pull out a win. New York goalie Alexandar Geogiev got the start in net for the Rangers and took the loss in the game as he allowed 6 goals on 24 shots.  Henrik Lundqvist entered late in the game and made saves on all 6 shots that he faced.

With the loss against Edmonton, New York is now 19-16-4 on the season which is good enough for 7th place in the Metropolitan Division.  Offensively the Rangers are led in points by Artemi Panarin in points with 55 and in goals with 22 while 6 have come on the power play.  Panarin also leads the Rangers in assists on the season with 33.  Goalie Alexandar Georgiev is 10-8-1 with 2 shutouts and a goals against average of 3.23 on the season.  The Rangers other goalie is Henrik Lundqvist who has recorded a record of 9-8-3 with a goals against average of 3.05 so far this year.  New York enters Thursday’s game with 2 players listed on their injury report as Brendan Lemieux and Libor Hajek are listed as out.

The Calgary Flames welcome the New York Rangers to town on Thursday after losing their last game to the Chicago Blackhawks by the score of 5-3.  The Flames received goals from Sam Bennett, Michael Frolik and Sean Monahan but it wasn’t enough to keep up with the Blackhawks.  Flames goalie David Rittich took the loss in net for the Flames as he allowed 4 goals on 32 of Chicago’s shots on the night.

After the loss against the Blackhawks, the Flames are 20-17-5 and are currently in 5th place in the Pacific Division. The Flames offense is led in points by Matthew Tkachuk who has tallied 36 points so far on the season.  Tkachuk also leads the Flames in assists on the year with 21, with 9 coming on the power play.  Elias Lindholm leads the Flames in goals on the year with 16, with 6 coming while on the power play.  Calgary goalie David Rittich is 17-10-5 on the year with 2 shutouts and a 2.78 goals against average.  Backup goalie Cam Talbot is 3-7-0 so far this season with a goals against average of 2.73.  The Flames come into Thursday’s game with 1 player listed on their injury report as T.J. Brodie is listed as out.