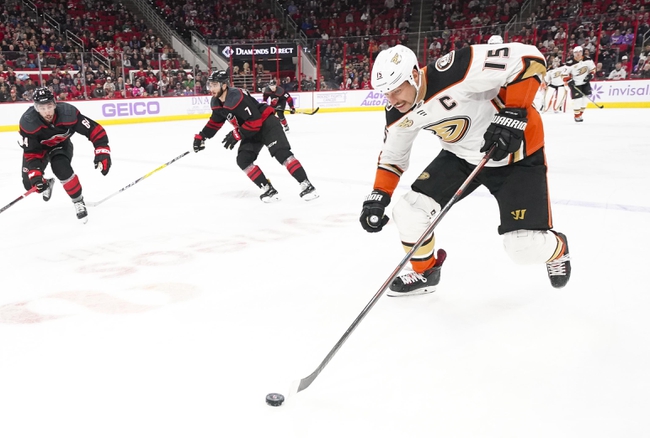 The Anaheim Ducks make their way to Raleigh, NC on Friday for a game against the Hurricanes but are in Nashville to play the Predators on Thursday night.  In their last game, the Ducks were defeated by the St. Louis Blues by the score of 4-1.  Anaheim received their lone goal on the night from Maxime Comtois at 15:23 of the 1st period on a goal that was unassisted.  Ducks goalie John Gibson got the start in net for Anaheim and took the loss, allowing 4 goals on 34 of the Blues’ shots in the game.

With the loss against the Blues, the Ducks are now 17-24-5 on the season and are currently in 8th place in the Pacific Division.  Veteran center Ryan Getzlaf continues to be the most productive player for the Ducks are he leads the team in points with 30.  Getzlaf also leads Anaheim in assists with 19.  Jakob Silfverberg leads the Ducks in goals on the season as he has scored 15, with 3 coming while on the power play.  Goalie John Gibson is 13-19-3 on the year with 1 shutout and a goals against average of 2.99.  Backup goalie Ryan Miller is 4-5-2 on the season with a goals against average of 3.20.  The Ducks enter Thursday’s game with a clean bill of health as they do not have anyone listed on their injury report.

The Carolina Hurricanes welcome the Anaheim Ducks to town on Friday after losing their last game to the Washington Capitals by the score of 2-0.  Carolina was able to put a total of 23 shots on net against the Capitals but were never able to sneak one by goalie Ilya Samsonov.  Hurricanes goalie Petr Mrazek recorded the loss in net as he allowed 2 goals on 30 of the Capitals shots that he faced.

The Anaheim Ducks have scored an average of 2.43 goals per game on the year while allowing 3.17 goals per game.  The Carolina Hurricanes have scored 3.22 goals per game this season while allowing 2.72 goals per game.  In their last 5 games, the Ducks are 1-4 and have lost 4 games in a row while the Hurricanes are 3-2.  The Ducks won the first meeting of the season between these two teams by the score of 4-2 in a game played in Anaheim.  The Ducks have won 2 of the last 3 meetings between these two teams, but I don’t see them beating the Hurricanes against as Carolina and by far been the better team at both ends of the ice this season.  Also, Carolina is 15-8 at home this season while Anaheim is 6-15-2 on the road.  Carolina wins this one 3-1.