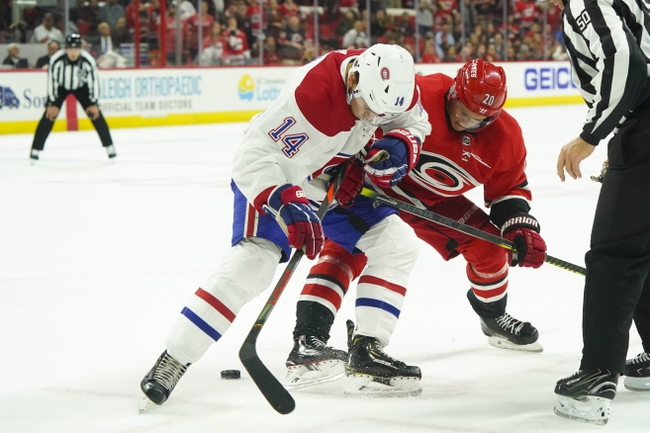 The Montreal Canadiens head to Raleigh, North Carolina on Tuesday for a game against the Carolina Hurricanes in a battle of two teams from the Eastern Conference.  In their last game, Montreal was defeated by the Florida Panthers by the score of 6-5.  The Canadiens received goals from Tomas Tatar, Jeff Petry, Max Domi, Jesperi Kotkaniemi and Shea Weber but it wasn’t enough to pull out a victory against the Panthers.  Montreal goalie Carey Price took the loss in net as he allowed 6 goals on 34 Florida shots in the game.

After the loss against Florida, Montreal is 18-15-6 which puts them in a 5th place in the Atlantic Division.  The Canadiens are led in points by Tomas Tatar as he has recorded 35 points on the season.  Tatar also leads Montreal in goals this season with 16.  The assists leader for Montreal is Phillip Danault who has recorded 20 on the year.  Goalie Carey Price is currently 16-13-3, with 1 shutout on the season and has a goals against average of 3.03.  Montreal enters their game against Carolina with 3 players listed on their injury report as Joel Armia, Jonathan Drouin and Paul Byron are all on injured reserve.

The Carolina Hurricanes welcome the Montreal Canadiens to town on Tuesday after winning their last game by the score of 6-4 against the Washington Capitals.  Carolina received goals from Lucas Wallmark, Dougie Hamilton, Martin Necas, Andrei Svechnikov and 2 goals from Warren Foegele.  Hurricanes goalie Petr Mrazek recorded the win in net as he made saves on 25 of 29 Capitals shots that he faced.

The Montreal Canadiens have scored 3.28 goals per game on the year while allowing 3.26 goals per game.  The Carolina Hurricanes have scored 3.36 goals per game on the season while allowing 2.85 goals per game.  Both teams are 2-3 in their last 5 games.  The Hurricanes won the first meeting of these two teams this season by the score of 4-3 in a shootout.  I look for this to be a high scoring game as the total has gone over in all 5 of Montreal’s last 5 games as well as the score going over in 4 of Carolina’s last 6 games.  I will be going with the Hurricanes in this one as they are 5-0 in their last 5 home games against Montreal.  Carolina wins this one 4-3.