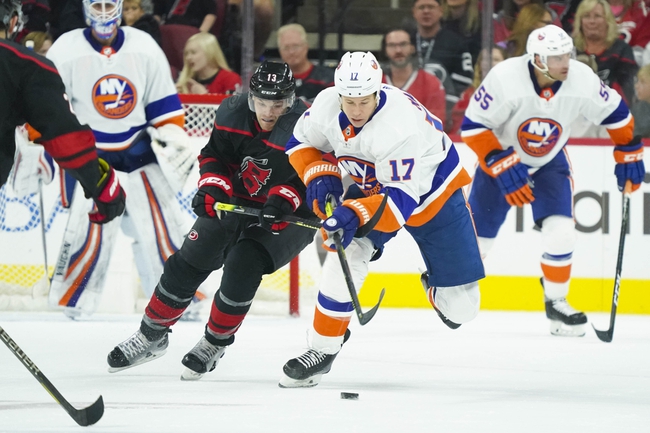 The New York Islanders the trip to Raleigh, NC on Sunday for a game against the Carolina Hurricanes in a game between two teams in the Metropolitan Division.  In their last game, the Islanders were defeated by the New York Rangers by the score of 3-2.  The Islanders received goals from Josh Bailey and Anthony Beauvillier in the game, but it wasn’t enough to pull out the win.  Islanders goalie Semyon Varlamov took the loss in net for his team as he allowed 3 goals on 28 of the Rangers shots in the game.

The New York Islanders are 28-14-4 on the season and are currently in 3rd in the Metropolitan Division. The Islanders points, assists and goals leader is Mathew Barzal who has recorded 39 points this season as well as 18 goals and 22 assists.  Goalie Semyon Varlamov is currently 15-7-4 with 2 shutouts to go along with a goals against average of 2.50.  Thomas Greiss is 13-7-0 with a 2.54 goals against average.  The Islanders enter Sunday’s game against the Hurricanes with 2 players on their injury report as Casey Cizikas and Jordan Eberle are listed as day to day.

The Carolina Hurricanes welcome the New York Islanders to town on Sunday after losing their last game to the Anaheim Ducks by the score of 2-1 in overtime.  Carolina received their lone goal in the game from Sebastian Aho who scored at 3:59 of the 1st period with assists from Joel Edmundson and Teuvo Teravainen.  Hurricanes goalie James Reimer recorded the loss in net as he allowed 2 goals on 37 of the Ducks shots that he faced.

The New York Islanders have scored an average of 2.85 goals per game on the year while allowing 2.63 goals per game.  The Carolina Hurricanes have scored 3.15 goals per game this season while allowing 2.71 goals per game.  Both teams are 2-3 in their last 5 games, but the Hurricanes have lost 3 games in a row.  The Hurricanes won the first meeting between these two teams this season by the score of 5-2 in a game played in Carolina.  Carolina’s offense has been the better of the two teams this season, but they have struggled to put pucks in the net recently, scoring just 3 goals in their last 3 games.  I am going with the Islanders in this one.  New York wins 4-2.