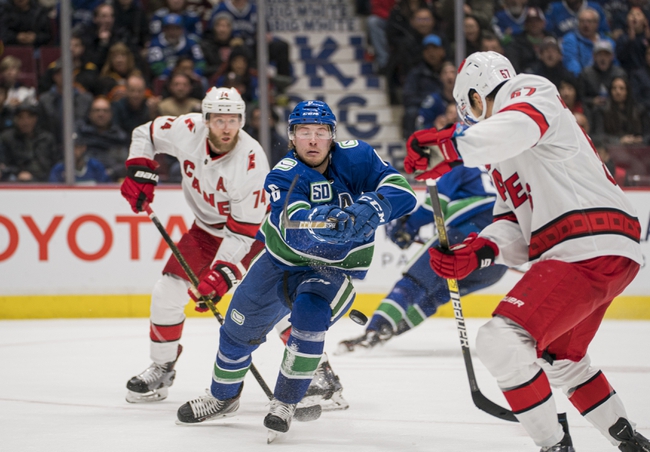 The Vancouver Canucks travel to Raleigh, NC on Sunday for a game against the Carolina Hurricanes but first they must face the New York Islanders on Saturday.  In their last game, Vancouver defeated the San Jose Sharks by the score of 5-2.  The Canucks received goals from Quinn Hughes, Tyler Myers, Jake Virtanen, Brandon Sutter and Tanner Pearson on their way to the win.  Vancouver goalie Jacob Markstrom started in net and recorded the win as he made saves on 38 of 40 San Jose shots on the night.

On the year the Canucks are now 29-18-4, which puts them in 1st place in the Pacific Division. Vancouver is lead in points and goals by Elias Pettersson who has recorded 52 points and 21 goals on the year, including 7 goals while on the power play.  Pettersson also leads the Canucks in assists on the year as he has recorded 31 so far this season.  The Canucks have received decent goal play from both of their goalies Thatcher Demko is 10-5-1 with a goals against average of 2.93 on the season while the Canucks’ other goalie Jacob Markstrom is 19-13-3 on the year with 1 shutout and a 2.69 goals against average.  The Canucks enter Saturday’s game with 2 players listed on their injury report as Michael Ferland and Tyler Motte are on injured reserve.

The Carolina Hurricanes welcome the Vancouver Canucks to town on Sunday after losing their last game by the score of 4-3 against the Vegas Golden Knights.  Carolina received goals from Teuvo Teravainen, Brock McGinn and Sebastian Aho but it was enough to pull out a victory. Hurricanes goalie Petr Mrazek recorded the loss in net as he allowed 4 goals on the 37 shots that he faced.

The Vancouver Canucks have scored an average of 3.27 goals per game this season while allowing 2.96 goals per game.  The Carolina Hurricanes have scored 3.12 goals per game on the year while allowing 2.67 goals per game.  In their last 5 games, the Canucks are 4-1 and have won 4 games in a row while the Hurricanes are 2-3.  The Canucks won the first meeting of the season between these two teams by the score of 1-0 in overtime in a game played at Vancouver.  Carolina has won 2 of the last 3 meetings against Vancouver, going 2-0-1 and winning by the average score of 3.33-2.00.  However, the Canucks have been hot recently, so I am going go with them in this one.  Vancouver wins 4-2.