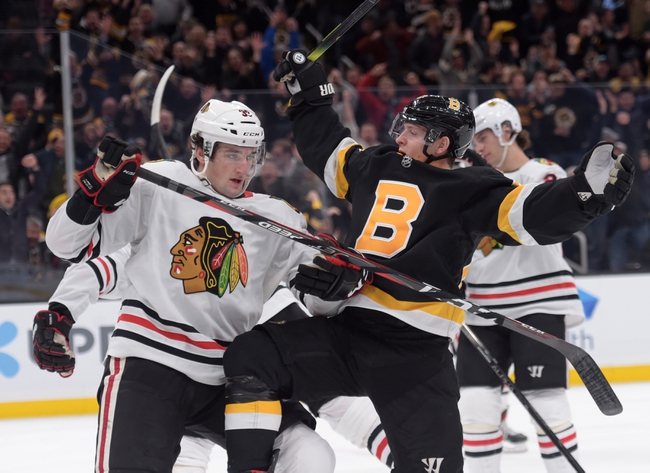 The Boston Bruins travel to Chicago, IL on Wednesday for a game against the Blackhawks but first must play the Vancouver Canucks on Tuesday night.  In their last game, the Bruins defeated the Minnesota Wild by the score of 6-1.  The Bruins received 2 goals from Torey Krug to go along with goals from Brad Marchand, David Pastrnak, Anders Bjork and Jake DeBrusk. Boston goalie Jaroslav Halak was in net for the Bruins and recorded the win, making saves on 25 of 26 Minnesota shots on the night.

The Chicago Blackhawks welcome the Boston Bruins to town on Wednesday after winning their last game against the Arizona Coyotes by the score of 3-2 in a shootout.  Chicago received 2 goals Brandon Saad in regulation before beating the Coyotes 2-0 in the shootout. Chicago goalie Corey Crawford was in net for the Blackhawks and recorded the win while making saves on 40 of 42 Arizona shots on the night.

With the win against Arizona, Chicago is now 25-21-6 on the season and is currently in 4th place in the Central Division. For Chicago's offensive totals on the season look no further than right winger Patrick Kane who continues to add to what has been a great career with the Blackhawks. Kane leads the team with 65 points, goals with 25 and assists with 40.  Goalie Corey Crawford is currently holding a record of 10-13-2 with 1 shutout and a goals against average of 2.91.  Meanwhile, Chicago’s other goalie Robin Lehner is 15-8-4 on the season with a goals against average of 2.86.  Chicago enters Wednesday’s game with a clean bill of health as they do not have anyone listed on their injury report.

The Boston Bruins have scored an average of 3.34 goals per game on the season while allowing 2.45 goals per game.  The Chicago Blackhawks have scored 2.98 goals per game on the year while allowing 3.06 goals per game.  Both teams are 4-1 in their last 5 games and the Bruins have won 3 games in a row.  The Blackhawks won the first meeting between these two teams earlier this season by the score of 4-3 in overtime in a game played at Boston.  Boston has won 2 of their last 3 games against Chicago and has won by the average score of 4.33-3.00.  Boston is 14-8-3 on the road while Chicago is 12-12-3 at home.  I will be going with the Bruins in this one.  Boston wins 4-3.