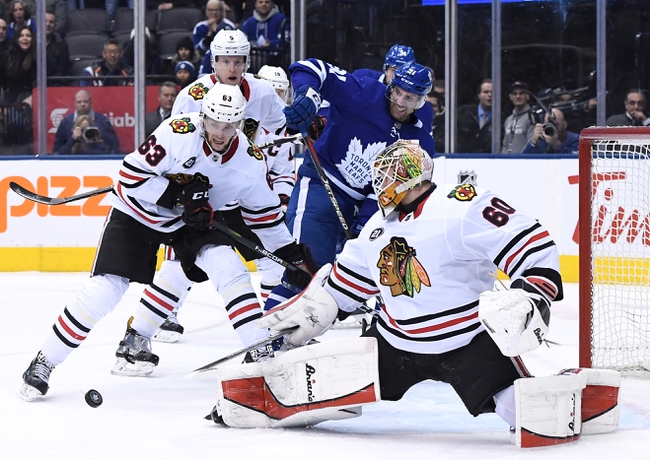 The Toronto Maple Leafs head to Chicago on Sunday for a game against the Blackhawks, but first must make a stop in Philadelphia on Saturday for a game against the Flyers.  In their last game, the Maple Leafs were taken down by the Boston Bruins, 4-2.  Kasperi Kapanen had a decent day for Toronto, recording his third goal of the season and recording an assist.  The other Toronto goal was scored by Alexander Kerfoot on the power play which tied the game at 2 in the second, but Boston took control in the third, sealing the win for the Bruins.  Goalie Michael Hutchinson got his third start of the season and allowed 4 goals on 39 shots, dropping his record to 0-2-1 with a 4.03 goals against average on the year.

On the season, the Maple Leafs are currently 9-5-3 and have won 3 games in a row.  Austin Matthews leads Toronto in points with 19 and in goals with 13, 4 coming on the power play.  Center Mitch Marner leads the Maple Leads in assists as he has recorded 14 on the year.  Goalie Frederick Anderson is 9-2-2 on the season with a 2.69 goals against average. While Anderson has been good in net so far this season, the same cannot be said for backup goalie Michael Hutchinson who is currently 0-3-1 with a 4.26 goals against average.  Toronto enters Saturday’s game with one player on their injury report as John Tavares is listed as day to day.

The Chicago Blackhawks welcome the Toronto Maples Leafs to town on Sunday, but first Chicago has to play a game against the Pittsburgh Penguins on Saturday.  In their last game, the Blackhawks were victorious, beating the Vancouver Canucks by the score of 5-2.  Patrick Kane was all over the ice as he scored a goal and recorded 2 assists on the night.  Center Dylan Strome was also very productive in the Blackhawks game against the Canucks as he recorded 3 assists on the night.  Along with Kane’s, Chicago also received goals from Alex DeBrincat, Andrew Shaw, David Kampf and Brandon Saad.  Goalie Crawford also looked strong while starting in net for the Blackhawks as he made 36 saves on 38 Vancouver shots.

With the win against Vancouver, Chicago is now 5-7-3 on the season and has 3 wins in their last 10 games.  For Chicago's offensive totals on the season look no further than right winger Patrick Kane who continues to add to what has been a great career with the Blackhawks. Kane leads the team with 16 points, goals with 5 and assist with 11. Although Kane has played well it has not stopped him from having a plus/minus rating of minus 5 on the year.  Goalie Corey Crawford is currently holding a record of 2-4-1 with a goals against average of 3.49.  Meanwhile, backup goalie Robin Lehner is 3-3-2 on the season with a goals against average of 2.33.