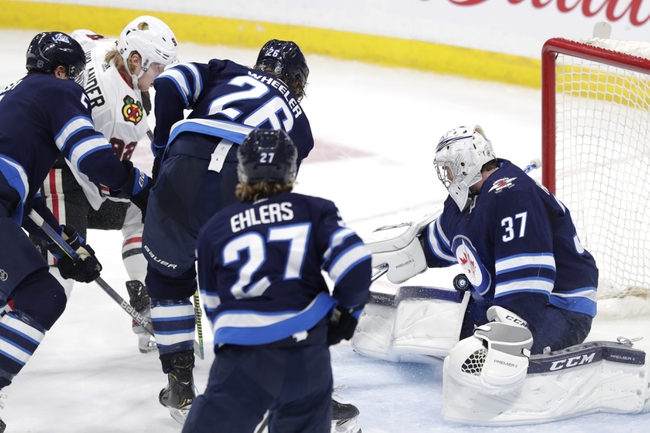 The Winnipeg Jets travel to Chicago, IL on Sunday for a game against the Blackhawks in a matchup of two teams from the Central Division.  In their last game, the Jets were defeated by the Tampa Bay Lightning by the score of 7-1.  Winnipeg received their lone goal in the game from Jack Roslovic at 11:44 on the 2nd period with an assist from Mathieu Perreault.  Both Jets goalie saw action in the game as Connor Hellebuyck allowed 5 goals on 12 shots before giving way to Laurent Brossoit who allowed 2 goals on the 14 shots that he faced.

The Winnipeg Jets are now 25-19-4 on the season, good enough for 4th place in the Central Division. The Jets are led in points by Mark Scheifele who has totaled 52 on the season.  Scheifele also leads Winnipeg in assists on the season with 30.  Kyle Connor leads the Jets in goals so far this year as he has tallied 24, including 7 while on the power play.  The Jets have received solid goaltending all season from goalie Connor Hellebuyck who has a record of 21-14-4 to go along with 4 shutouts and a goals against average of 2.67.  Backup goalie Laurent Brossoit is currently 4-5-0 on the season with a goals against average of 3.67. The Jets come into Sunday’s game with 2 players listed on their injury report as Tucker Poolman is injured reserve and Dmitry Kulikov is listed as day to day.

The Chicago Blackhawks welcome the Winnipeg Jets to town on Sunday after winning their last game against the Montreal Canadiens by the score of 4-1.  Chicago received 2 goals from Zack Smith to go along with goals from Alex DeBrincat and Drake Caggiula on their way to the win. Chicago goalie Corey Crawford was in net for the Blackhawks and recorded the win while making saves on 32 of 33 Canadiens shots on the night.

With the win against Montreal, Chicago is now 22-20-6 on the season and is currently in 5th place in the Central Division. For Chicago's offensive totals on the season look no further than right winger Patrick Kane who continues to add to what has been a great career with the Blackhawks. Kane leads the team with 60 points, goals with 24 and assists with 36.  Goalie Corey Crawford is currently holding a record of 8-13-2 with 1 shutout and a goals against average of 3.00.  Meanwhile, Chicago’s other goalie Robin Lehner is 14-7-4 on the season with a goals against average of 2.85.  Chicago enters Sunday’s game with 3 players listed on their injury report as Brandon Saad, Dylan Strome and Carl Dahlstrom are on injured reserve.