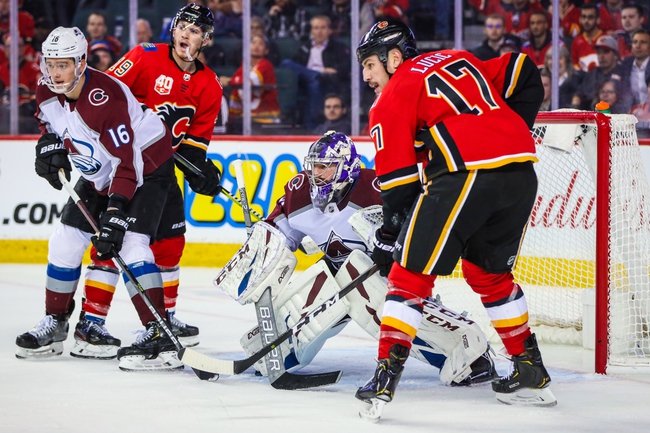 The Calgary Flames head to Denver, CO on Monday for a game against the Avalanche in a matchup of 2 Western Conference teams.  The Flames won their last game against the Los Angeles Kings by the score of 4-3.  The Flames received goals from Milan Lucic, Zac Rinaldo, Sean Monahan and Dillion Dube in the win against the Kings.  Flames goalie Cam Talbot got the win in net for the Flames as he recorded 30 saves on 33 of Los Angeles’s shots.

After the win against the Kings, the Flames are 15-12-4 and are currently in a 4th place tie in the Pacific Division. The Flames offense is led in points by Matthew Tkachuk who has tallied 25 points so far on the season.  Elias Lindholm leads the Flames in goals on the year with 14, with 5 coming while on the power play.  Johnny Gaudreau leads the Flames in assists with 17 on the season, with 6 coming while on the power play.  Calgary goalie David Rittich is 13-7-4 on the year with 2 shutouts and a 2.69 goals against average.  Backup goalie Cam Talbot is 2-5-0 so far this season with a goals against average of 3.20.  The Flames come into Monday’s game with 2 players listed on their injury report as Austin Czarnik is on injured reserve while Mark Jankowski is listed as out.

The Colorado Avalanche welcome the Calgary Flames to Denver after winning their last game by the score of 4-1 against the Boston Bruins.  Colorado received goals from Valeri Nichushkin, Ian Cole, Andre Burakovsky and Gabriel Landeskog in the win against the Bruins. Two Colorado goalie’s saw action in their game against Boston as Philipp Grubauer allowed 1 goal on 4 shots while Pavel Francouz stopped all 16 Boston shots that he faced on the night.

With the win against Boston, Colorado is now 19-8-2 and is in 2nd place in the Central Division.  Nathan MacKinnon leads the Avs in points with 45, in goals win 18 and in assists with 27.  MacKinnon is clearly Colorado’s most dangerous player and is someone that opposing teams must be aware of at all times.  Colorado goalie Philipp Grubauer is 10-5-2 with a goals against average of 2.76.  Goalie Pavel Francouz is 7-2-0 with a goals against average of 2.24.  Colorado comes into Monday’s game with 5 players listed on their injury report as Nazem Kadri and Matt Calvert are listed as out while Vladislav Kamenev, Cale Makar and Philipp Grubauer are listed as day to day.