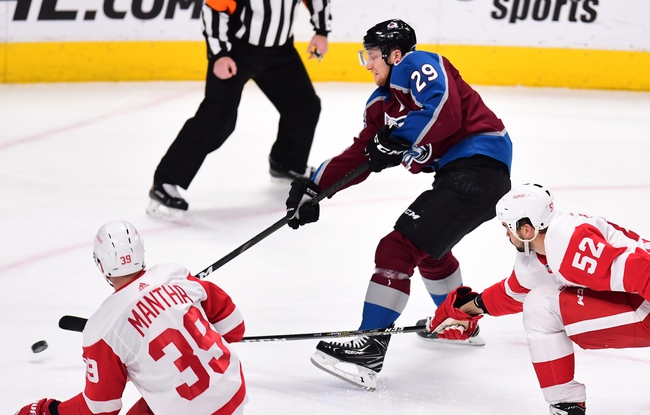 The Detroit Red Wings travel to Denver, CO on Monday for a game against the Avalanche in a matchup of teams from the Eastern and Western Conference.  In their last game, Detroit was defeated by the Florida Panthers by the score of 4-1. The Red Wings received their lone goal in the game from Dylan Larkin at 5:15 of the 2nd period with an assist from Darren Helm.  Detroit goalie Jimmy Howard got the start in net for the Red Wings and took the loss, allowing 3 goals on 37 shots.

On the year the Red Wings are 12-33-4 and are in 8th place in the Atlantic Division.  The Red Wings are led in points and goals by Tyler Bertuzzi who has 34 points this season to go along with 16 goals, including 2 while on the power play.  The Red Wings are led in assists by Dylan Larkin who has tallied 20 on the year with 4 coming while on the power play.  Detroit goalie Calvin Pickard is 0-2-0 with a 5.46 goals against average this season.  Jimmy Howard is 2-17-2 with a goals against average of 4.06 so far this year.  Detroit enters Monday’s game with 3 players listed on their injury report as Trevor Daley and Valtteri Filppula are listed as day to day while Jonathan Bernier is on injured reserve.

The Colorado Avalanche welcome the Detroit Red Wings to town on Monday after winning their game against the St. Louis Blues by the score of 5-3.  Colorado received goals from Nathan MacKinnon, Tyson Jost, Cale Makar, Andre Burakovsky and Gabriel Landeskog on their way to the win.  Colorado goalie Philipp Grubauer got the start in net and recorded the win, making saves on 21 of 24 St. Louis shots on the day.

With the win against St. Louis, Colorado is now 27-15-6 and is in 2nd place in the Central Division.  Nathan MacKinnon leads the Avs in points with 70, in goals with 28 and in assists with 42.  MacKinnon is clearly Colorado’s most dangerous player and is someone that opposing teams must always be aware of.  Colorado goalie Pavel Francouz is 11-4-2 with a goals against average of 2.41.  Goalie Philipp Grubauer is 14-10-4 with a goals against average of 2.82. Colorado comes into Monday’s game with 1 player listed on their injury report as Joonas Donskoi is listed as out.