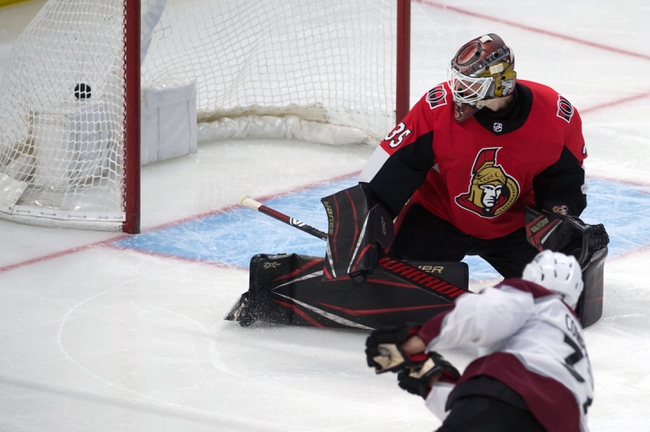 The Ottawa Senators travel to Denver, CO on Tuesday for a game against the Avalanche in a matchup of teams from the Eastern and Western Conference.  In their last game, Ottawa was defeated by the Winnipeg Jets by the score of 5-2.  The Senators received goals from Jean-Gabriel Pageau and Mikkel Boedker but it wasn’t enough to pull out a win against the Jets.  Both Senators goalies saw action in the game as Craig Anderson allowed 4 goals on 22 shots while Marcus Hogberg allowed 1 goal on the 12 shots that he faced against Winnipeg.

With the loss against Winnipeg, Ottawa is 18-26-11, which places them in 7th place in the Atlantic Division.  Ottawa is led in points and goals by Jean-Gabriel Pageau, who has 34 points and 21 goals on the season. Thomas Chabot leads the Senators in assists with 25, with 10 coming while on the power play.  Goalie Marcus Hogberg has a record of 2-4-7 and currently has a goals against average of 2.98.  Craig Anderson has a record of 7-13-2 with a goals against average of 3.27.  Ottawa comes into Tuesday’s game with 2 players listed on their injury report as Vladislav Namestnikov and Mark Borowiecki are both listed as day to day.

The Colorado Avalanche welcome the Ottawa Senators to town on Tuesday after winning their last game against the Minnesota Wild by the score of 3-2.  Colorado received goals from Nathan MacKinnon, Gabriel Landeskog and Pierre-Edouard Bellemare on their way to the win.  Colorado goalie Pavel Francouz got the start in net and recorded the win, making saves on 34 of 36 Minnesota shots on the night.

With the win against Minnesota, Colorado is now 32-16-6 and is in 2nd place in the Central Division.  Nathan MacKinnon leads the Avs in points with 76, in goals with 32 and in assists with 44.  MacKinnon is clearly Colorado’s most dangerous player and is someone that opposing teams must always be aware of.  Colorado goalie Pavel Francouz is 13-4-2 with a goals against average of 2.42.  Goalie Philipp Grubauer is 17-11-4 with 1 shutout and a goals against average of 2.72. Colorado comes into Tuesday’s game with 1 player listed on their injury report as Nazem Kadri is day to day.

The Ottawa Senators have scored 2.69 goals per game this season while allowing 3.30 goals per game.  The Colorado Avalanche have scored 3.69 goals per game on the year while allowing 2.88 goals per game.  In their last 5 games, the Senators are 0-5 while the Avalanche are 4-1 and have won 4 games in a row.  The Avalanche won the first meeting of the season between these two teams by the score of 4-1 in a game played in Ottawa.    The total has gone over in 6 of Ottawa's last 6 games when playing on the road against Colorado.  The total has gone over in 7 of Colorado's last 9 games at home. Colorado is 7-1 in their last 8 games.  I am going with the Avalanche in this one.  Colorado wins 5-2.