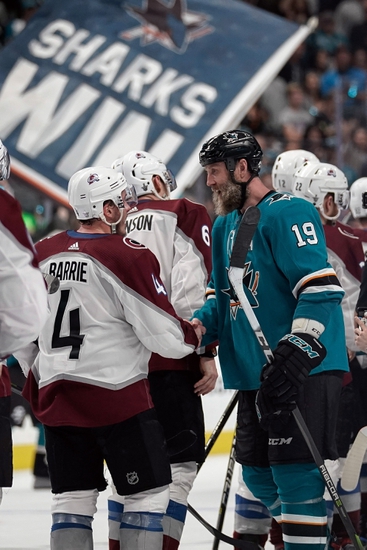 The San Jose Sharks head to Denver, CO on Thursday for a game against the Avalanche in a matchup of teams from the Western Conference.  In their last game, the Sharks were defeated by the Arizona Coyotes by the score of 6-3.  The Sharks received goals from Kevin Labanc, Timo Meier and Evander Kane but it wasn’t enough to pull out a win.  Aaron Dell recorded the loss in net for the Sharks as he allowed 4 goals on 38 Arizona shots on the night.

After the loss against Arizona, San Jose is now 21-23-4 on the season and are currently in 6th place in the Pacific Division.  Logan Couture has been the leader offensively for the Sharks all season as he leads the team in points with 36.  Evander Kane leads San Jose in goals with 19, with 10 coming on the power play.  San Jose is led in assists by Erik Karlsson who has recorded 30 on the season.  Goalie Martin Jones has a record of 13-15-2 with a goals against average of 3.19.  The Sharks other goalie is Aaron Dell who has a record of 8-8-2 with a goals against average of 2.84.  San Jose comes into Thursday’s game with 2 player listed on their injury report as Brett Burns and Barclay Goodrow are listed as day to day.

The Colorado Avalanche welcome the San Jose Sharks to town on Thursday night after losing their game to the Dallas Stars by the score of 3-2 in overtime.  Colorado received goals from Nikita Zadorov and Gabriel Landeskog in the overtime loss.  Colorado goalie Philipp Grubauer got the start in net and recorded the loss as allowed 3 goals on 30 of Dallas’ shots on the night.

With the loss against New York, Colorado is now 25-15-6 and is in 3rd place in the Central Division.  Nathan MacKinnon leads the Avs in points with 68, in goals with 27 and in assists with 41.  MacKinnon is clearly Colorado’s most dangerous player and is someone that opposing teams must be aware of at all times.  Colorado goalie Pavel Francouz is 11-4-2 with a goals against average of 2.41.  Goalie Philipp Grubauer is 12-10-4 with a goals against average of 2.92. Colorado comes into Thursday’s game with 2 players listed on their injury report as Andre Burakovsky and Joonas Donskoi are listed as day to day.