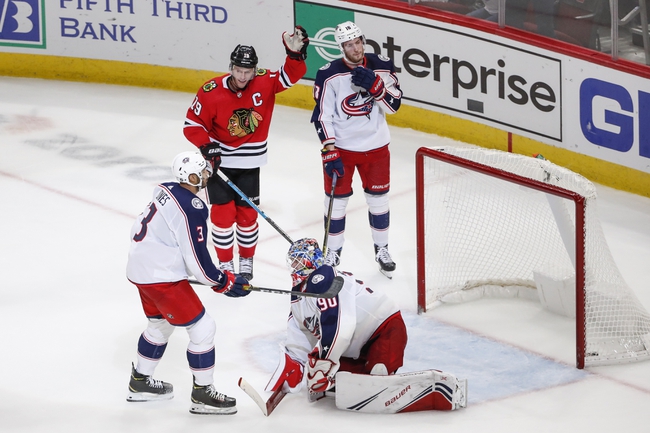 The Chicago Blackhawks head to Columbus, Ohio on Sunday for a game against the Blue Jackets in what should be an interesting matchup between the two teams.  In their last game, the Blackhawks defeated the New York Islanders by the score of 5-2 in overtime.  Chicago received goals from Dennis Gilbert, Dominik Kubalik, Alex DeBrincat, Jonathan Toews and Matthew Highmore on their way to the win. Chicago goalie Robin Lehner was in net for the Blackhawks and recorded the win while making saves on 38 of 40 Islanders shots on the night.

With the win against New York, Chicago is now 16-17-6 on the season and is currently in 7th place in the Central Division. For Chicago's offensive totals on the season look no further than right winger Patrick Kane who continues to add to what has been a great career with the Blackhawks. Kane leads the team with 47 points, goals with 20 and assists with 27.  Goalie Corey Crawford is currently holding a record of 6-11-2 with 1 shutout and a goals against average of 3.20.  Meanwhile, Chicago’s other goalie Robin Lehner is 10-6-4 on the season with a goals against average of 2.82.  Chicago enters Sunday’s game with 4 players listed on their injury report as Brandon Saad, Brent Seabrook and Calvin de Haan are on injured reserve while Adam Boqvist is listed as out.

The Columbus Blue Jackets welcome the Chicago Blackhawks to town on Sunday after losing their last game by the score of 2-1 in overtime against the Washington Capitals.  Columbus received their lone goal from Jakob Lilja at the 9:17 mark of the second period with assists from Riley Nash and Ryan MacInnis.  Columbus goalie Joonas Korpisalo recorded the loss in net for the Blue Jackets despite giving up just 2 goals in the game, making saves on 34 of 36 Washington shots on the night.

Heading into Sunday’s game, the Blue Jackets are 17-14-7 and are currently in 6th place in the Metropolitan Division. The Blue Jackets leader in points is Pierre-Luc Dubois who has recorded 26 so far this season.  The Blue Jackets are also led in goals by Dubois who has 12 goals with 1 coming while on the power play.  The Columbus assist leader is Seth Jones who has 18 assists on the season.  Columbus goalie Joonas Korpisalo is 17-10-4 on the season with 2 shutouts and a goals against average of 2.52.  Meanwhile, backup goalie Elvis Merzlikins is 0-4-3 with a goals against average of 3.41 on the season.  The Blue Jackets come into Sunday’s game with 3 players listed on their injury report as Cam Atkinson is on injured reserve while Sonny Milano and Scott Harrington are listed as out.

The Chicago Blackhawks have scored 2.79 goals per game this season while allowing 3.15 goals per game.  The Columbus Blue Jackets have scored 2.61 goals per game on the year while allowing 2.82 goals per game.  In their last 5 games, the Blackhawks are 3-2 while the Blue Jackets are 3-1.  The Blackhawks won the first meeting of these two teams this season in a game played in Chicago by the score of 3-2 in overtime.  I don’t believe this will be a very high scoring game as the total has gone under in 4 of the last 5 meetings between these two teams.  Columbus is a hot team right now as they have put together a nice little run in their last 5 games and are also 8-3 in their last 11 games at home.  For those reasons, I will be going with the Blue Jackets in this one.  Columbus wins 3-2.