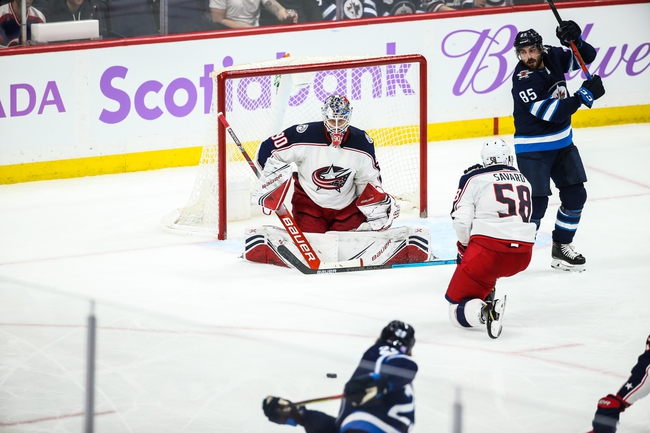 The Winnipeg Jets travel to Columbus, OH on Wednesday for a game against the Blue Jackets on Wednesday, but first must play the Carolina Hurricanes on Tuesday.  In their last game, the Jets were defeated by the Chicago Blackhawks by the score of 5-2.  Winnipeg received goals from Mark Scheifele and Patrik Laine but were never truly in the game against Chicago.  Connor Hellebuyck got the start in net for the Jets and took the loss, allowing 4 goals on the 32 shots that he faced.

The Winnipeg Jets are now 25-20-4 on the season, good enough for 5th place in the Central Division. The Jets are led in points by Mark Scheifele who has totaled 53 on the season.  Scheifele also leads Winnipeg in assists on the season with 30.  Kyle Connor leads the Jets in goals so far this year as he has tallied 24, including 7 while on the power play.  The Jets have received solid goaltending all season from goalie Connor Hellebuyck who has a record of 21-15-4 to go along with 4 shutouts and a goals against average of 2.71.  Backup goalie Laurent Brossoit is currently 4-5-0 on the season with a goals against average of 3.67. The Jets come into Tuesday’s game with 2 players listed on their injury report as Tucker Poolman is injured reserve and Adam Lowry is listed as day to day.

The Columbus Blue Jackets welcome the Winnipeg Jets to town on Wednesday after winning their last game by the score of 2-1 against the New York Rangers.  Columbus received both of their goals on the night from Oliver Bjorkstrand with both goals coming in the 3rd period.  Columbus goalie Matiss Kivlenieks started in net for the Blue Jackets and was solid in picking up the win, making saves on 31 of 32 New York shots on the night.

Heading into Wednesday’s game, the Blue Jackets are 26-16-8 and are currently in 4th place in the Metropolitan Division. The Blue Jackets leader in points is Pierre-Luc Dubois who has recorded 35 so far this season.  The Blue Jackets are also led in goals by Dubois who has 15 goals with 1 coming while on the power play.  The Columbus assist leader is Seth Jones who has 22 assists on the season.  Columbus goalie Matiss Kivlenieks is 1-0-0 on the season with a goals against average of 1.00.  Meanwhile, goalie Elvis Merzlikins is 8-6-4 with a goals against average of 2.36 on the season.  The Blue Jackets come into Wednesday’s game with 2 players listed on their injury report as Joonas Korpisalo is out and Sonny Milano is listed as day to day.