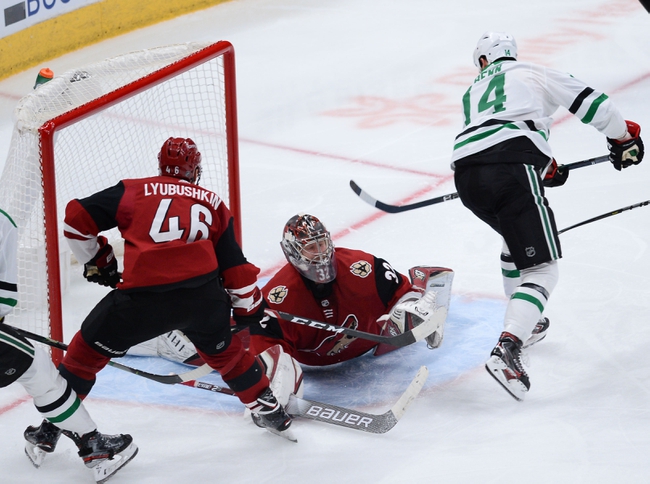 The Arizona Coyotes and the Dallas Stars meet in NHL action from the American Airlines Arena on Wednesday night.

The Arizona Coyotes will look to build on back-to-back wins after a 2-1 win over the New York Islanders last time out. Clayton Keller opened the scoring just under five minutes into the game and that goal would hold for the rest of the 1st and all of the 2nd before Conor Garland doubled the lead less than four minutes into the 3rd period. New York pulled a goal back just 2:49 later, but it wasn’t enough as the Coyotes would hold on over the remaining 13+ minutes to pick up the win. Antti Raanta got the win to improve to 13-13-3 on the year after stopping 28 of 29 shots faced in the winning effort.

The Dallas Stars will look to rebound from a 4-3 overtime loss to the Ottawa Senators last time out. John Klingberg opened the scoring just over three minutes into the game but Ottawa would tied the game just over four minutes later and would take the lead with just under two minutes to go in the opening frame. Stephen Johns tied the game at two just :33 later. The tie would hold up through the 2nd and the first half of the 3rd before Ottawa re-took the lead just before the midway point of the final period. Joe Pavelski would tie the game with just over five minutes to go, leaving us all square after regulation. Both teams had chances in overtime, but it was Ottawa that found the game-winner with just over a minute to go in the extra frame. Anton Khudobin took the loss, falling to 14-7-2 on the year after allowing 4 goals on 46 shots faced in the losing effort.

The plus money with the Coyotes is somewhat tempting given how well the ‘Yotes played in their last couple of games, but the fact remains that the Coyotes are struggling big time on the road and have had little success against the Stars over the years. Dallas coniues to play solid hockey, especially at home, so I’ll side with Dallas to pick up the win in regulation to get a more favorable prices on the Stars to get the win here.