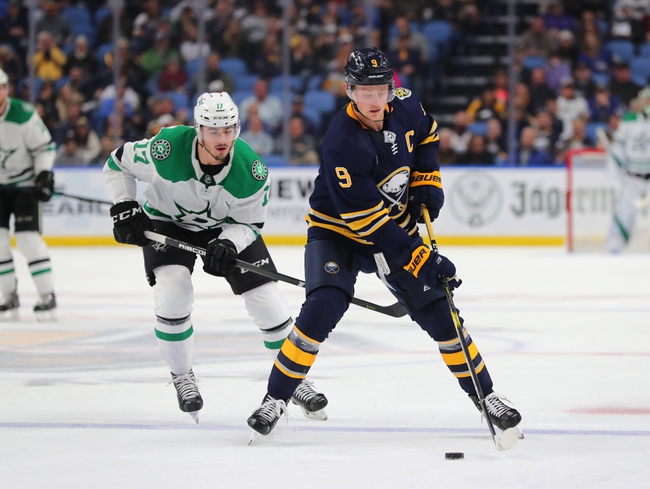 The Buffalo Sabres travel to Dallas, TX on Thursday for a game against the Stars in a matchup of teams from the Eastern and Western Conference.  In their last game, the Sabres defeated the Vegas Golden Knights by the score of 4-2.  Buffalo received goals from Kyle Okposo, Sam Reinhart, Jack Eichel and Curtis Lazar on their way to the win.  Goalie Linus Ullmark recorded the win in net for Buffalo, making saves on 24 of 26 Vegas shots on the night.

After the win against the Golden Knights, the Sabres are now 21-19-7 on the season, placing them in 5th place in the Atlantic Division.  Offensively the Sabres are led by Jack Eichel, who has recorded team highs in points with 61, goals with 28, and assists with 33. 6 of Eichel’s goals have come while on the power play as well as recording 13 assists while on the man advantage and he is clearly Buffalo’s biggest offensive threat. Buffalo goaltender Carter Hutton is 6-7-4 with 2 shutouts and a goals against average of 3.34.  Linus Ullmark is 15-12-3 on the season with 1 shutout and a 2.78 goals against average.  Buffalo enters Thursday’s game with 1 player listed on their injury report as Tage Thompson is on injured reserve.

The Dallas Stars welcome the Buffalo Sabres to town on Thursday after winning their last game by the score of 3-2 in overtime against the Colorado Avalanche.  Dallas received goals from Denis Gurianov, Jason Dickinson and Esa Lindell in the win.  Stars goalie Ben Bishop got the start in net for Dallas and recorded the win, making saves on 41 of the 43 Colorado shots on the night.

With the win against the Avalanche, the Stars are now 27-15-4 on the season which is good enough for Dallas to be in 2nd place in the Central Division. Tyler Seguin leads Dallas in points with 35 and assists with 24 on the year. Roope Hintz leads the Stars in goals with 15 on the season including 1 on the power play. Goalie Ben Bishop is currently 16-9-3 with 2 shutouts and a goals against average of 2.23.  Backup goalie Anton Khudobin is 11-6-1 with a goals against average of 2.13. The Stars come into Thursday’s game with 3 players listed on their injury report as John Klingberg and Stephen Johns are on injured reserve while Radek Faksa is listed as day to day.