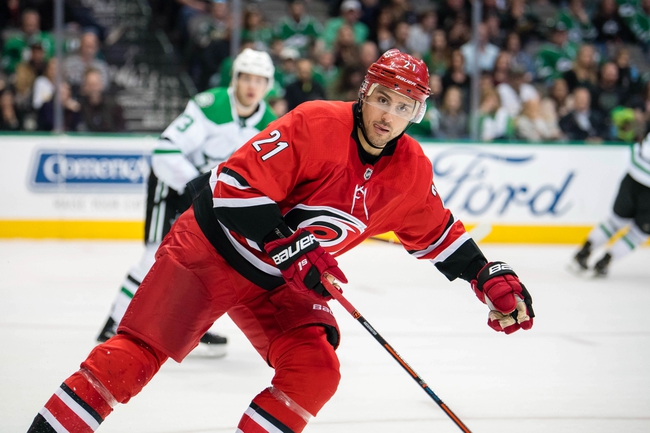 The Carolina Hurricanes head to Dallas, TX on Tuesday for a game against the Stars in a matchup of teams from the Eastern and Western Conference.  In their last game, the Hurricanes defeated the Vegas Golden Knights by the score of 6-5 in a shootout.  Carolina received goals from Teuvo Teravainen, Sebastian Aho, Erik Haula, Haydn Fleury and Martin Necas on their way to the win.  Hurricanes goalie James Reimer recorded the win in net as he made saves on 33 of the 38 shots that he faced.

The Dallas Stars welcome the Carolina Hurricanes to town on Tuesday after winning their last game against the St. Louis Blues by the score of 3-2 in overtime.  Dallas received 2 goals from Roope Hintz including the game winner in overtime to go along with a goal from Jamie Benn on their way to the victory.  Stars goalie Anton Khudobin got the start in net for Dallas and recorded the win, making saves on 23 of the 25 Blues’ shots on the night.

With the win against St. Louis, the Stars are now 31-19-5 on the season which is good enough for Dallas to be in 3rd place in the Central Division. Tyler Seguin leads Dallas in points with 40 and assists with 29 on the year. Roope Hintz leads the Stars in goals with 17 on the season including 1 on the power play. Goalie Ben Bishop is currently 18-12-4 with 2 shutouts and a goals against average of 2.38.  Backup goalie Anton Khudobin is 13-7-1 with a goals against average of 2.32. The Stars come into Tuesday’s game with 2 players listed on their injury report as Joe Pavelski and Alexander Radulov are listed as day to day.

The Carolina Hurricanes have scored an average of 3.15 goals per game this season while allowing 2.74 goals per game.  The Dallas Stars have scored 2.63 goals per game on the year while allowing 2.54 goals per game.  Both teams are 3-2 in their last 5 games and the Hurricanes have won 2 games in a row.  The total has gone over in 5 of Carolina's last 5 games.  The total has gone under in 10 of Dallas' last 14 games at home.  Dallas is 9-2 in their last 11 games when playing at home against Carolina.  I am going with the Stars in this one.  Dallas wins 3-2.