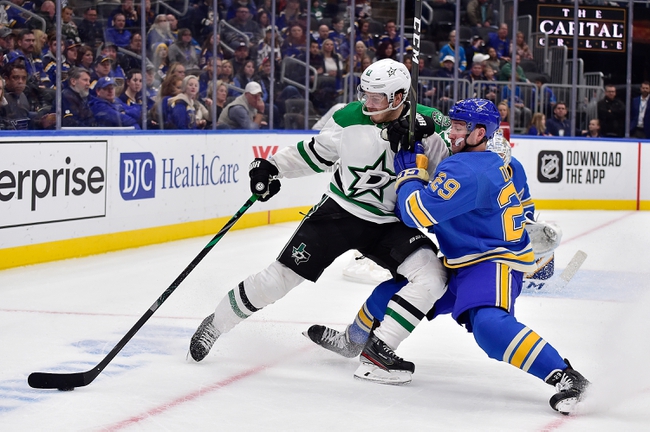 The St. Louis Blues and the Dallas Stars meet in a Central division clash in NHL action from the American Airlines Center on Friday night.

The St. Louis Blues will look to build on back-to-back wins after a 1-0 win over the Arizona Coyotes last time out. The game was scoreless through the first two periods and the first half of the 3rd before Ryan O’Reilly gave the Blues the lead with eight minutes to go in the game, a goal that would turn out to be the only puck to find the back of the net in all 60 minutes as the Blues outshot Arizona by a whopping 46-14 margin in the game, including a 37-6 margin in the final two periods and 18-2 in the 3rd period alone. Jordan Binnington got the win to improve to 26-11-7 on the year after stopping all 14 shots faced in the winning effort for his 3rd shutout of the season.

The Dallas Stars will try to build on a 3-2 win over the same Arizona Coyotes in their last outing. Corey Perry opened the scoring for Dallas just over two minutes into the game, and the lead would hold through the rest of the first period and a good chunk of the 2nd before Arizona tied the game at one with just over seven minutes to go in the middle frame. Radek Faksa gave Dallas the lead back with just under four minutes to go in the 2nd but the Coyotes would tie the game again just 2:11 later. Dallas took the lead for good just after the midway point of the 3rd thanks to Jamie Oleksiak, sending the Coyotes to yet another defeat as the Stars held on the rest of the way for the win. Ben Bishop got the win to improve to 21-12-4 on the year after stopping 39 of 41 shots faced in the winning effort.

Head-to-head, St. Louis is 4-1 in the last 5 meetings between these two teams.

I gave a serious look to St. Louis and the plus money as it’s not often that you’re going to get the defending champs as a dog. However, while back-to-back shutouts and wins may help get the Blues back on track, wins against Arizona and New Jersey (games that the Blues scraped by in parts of mind you) don’t really do much for me and the two times this month that the Blues have been on a back-to-back, St. Louis has dropped the second half of the back-to-back in both scenarios. Dallas is playing some strong hockey right now and all things considered, the price on Dallas at home is pretty reasonable here. I’ll lay the juice with the Stars in this one.