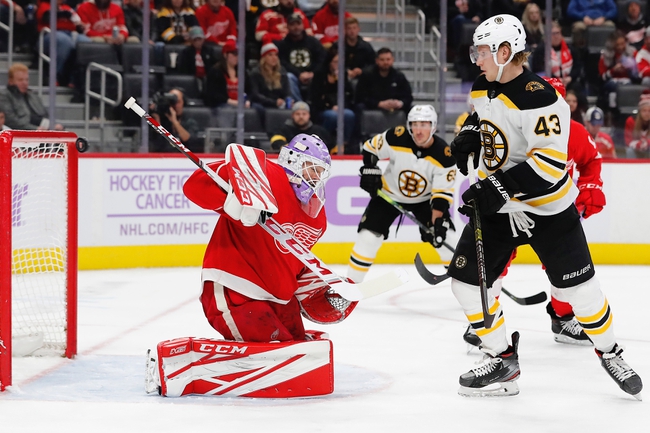 The Boston Bruins travel to Detroit, MI on Sunday for a game against the Red Wings but first must play the Arizona Coyotes on Saturday night.  In their last game, the Bruins defeated the Minnesota Wild by the score of 6-1.  The Bruins received 2 goals from Torey Krug to go along with goals from Brad Marchand, David Pastrnak, Anders Bjork and Jake DeBrusk. Boston goalie Jaroslav Halak was in net for the Bruins and recorded the win, making saves on 25 of 26 Minnesota shots on the night.

The Detroit Red Wings welcome the Boston Bruins to town on Sunday after losing their last game to the Columbus Blue Jackets by the score of 2-0.  The Red Wings were only able to put a total of 16 shots on net in the game and were never able to get one past Blue Jackets’ goalie Elvis Merzlikins.  Detroit goalie Jimmy Howard got the start in net for the Red Wings and took the loss, allowing 1 goals on 43 shots.

On the year the Red Wings are 13-39-4 and are in 8th place in the Atlantic Division.  The Red Wings are led in points and goals by Dylan Larkin who has 39 points this season. Tyler Bertuzzi leads Detroit in goals on the season with 18, including 3 while on the power play.  The Red Wings are also led in assists by Larkin who has tallied 24 on the year with 4 coming while on the power play.  Detroit goalie Jonathan Bernier is 11-14-2 with 1 shutout and a 2.89 goals against average this season.  Jimmy Howard is 2-21-2 with a goals against average of 3.98 so far this year.  Detroit enters Sunday’s game with 5 players listed on their injury report as Mike Green, Frans Nielsen and Anthony Mantha are on injured reserve while Darren Helm is out and Madison Bowey is day to day.

As of Saturday afternoon, the Boston Bruins have scored 3.33 goals per game on the year while allowing 2.38 goals per game.  The Detroit Red Wings have scored 2.02 goals per game on the season while allowing 3.77 goals per game.  In their last 5 games, the Bruins are 5-0 while the Red Wings are 1-4.  The Red Wings won the first meeting of the season between these two teams by the score of 4-2 in a game played in Detroit.  Surprisingly, Detroit has won the last 3 meetings between these two teams by the average score of 4.67-2.33.  Detroit is 8-18-2 at home this season while Boston is 15-8-3 when playing on the road.  I am going to go with the Bruins in this one.  They are better at both ends of the ice and let’s be honest, I just can’t pick Detroit to win anything this season.  Boston wins 4-1.