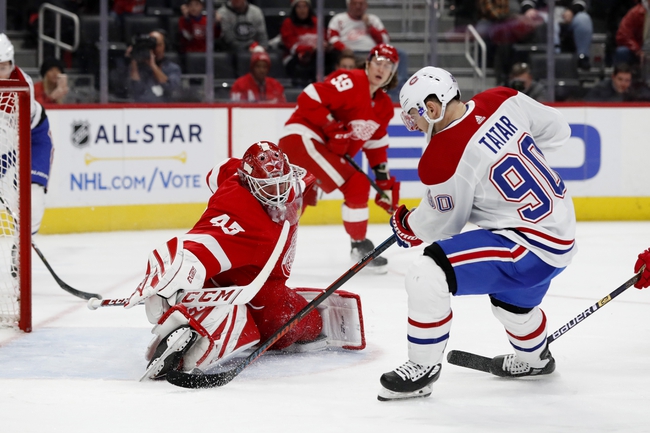 The Montreal Canadiens and the Detroit Red Wings meet in NHL action from Little Caesars Arena on Tuesday night.

The Montreal Canadiens come into this one looking to snap a four-game losing streak after a 4-3 overtime loss to Dallas last time out. Joel Armia opened the scoring for the Habs just over a minute into the game and the lead would hold untilt he 2nd where Jordan Weal and Nick Cousins scored 2:25 apart to push Montrel’s lead to 3-0. Dallas responded just 2:42 later and cut the deficit to one with just over four minutes to go in the 2nd before tying the game at three just past the nine minute mark of the 3rd period. The rest of the 3rd wouldn’t produce a winner, so it was off to overtime where Dallas completed the comeback with just over two minutes to go in the extra frame. Carey Price ended up with the loss, falling to 24-21-5 on the year after allowing all 4 goals on 26 shots faced in the losing effort.

The Detroit Red Wings will also be out to snap a four-game losing skid after a 5-1 loss to the Pittsburgh Penguins in their last outing. As has been the case for a lot of Red Wings games, Detroit took the lead just under six minutes into the game before Pittsburgh tied the game at one just 2:21 later. The Penguins took a lead with just over five minutes to go in the opening frame before pouring it on in the 2nd with a pair of goals 5:02 apart early in the 2nd and adding a 5th just under four minutes after that. Pittsburgh would ride that 5-1 cushion all the way to the finish line as the Red Wings were dealt yet another loss. Jimmy Howard took the loss, falling to 2-22-2 on the year after allowing 4 goals on 16 shots before being pulled in the 2nd period.

I’m not trying to get behind either of these teams right now, as Detroit’s burned me twice in the last week, and Montreal’s falling apart just when the Canadiens looked like they might get back into the playoff race. I mean the losses are forgivable, with Montreal losing at Boston and at Pittsburgh before falling to a red hot Dallas team, while Detroit lost at Pittsburgh and Boston in their last couple of games as well. Instead, I’m going to side with the over. Both of these teams have been giving up 4-5 goals for the most part during their respective losing stretches, and while the offenses haven’t held up their end for the most part, I think we could see a 4-3 type of game here so I’ll take the over in what seems like a low total given the defensive issues lately on both sides.